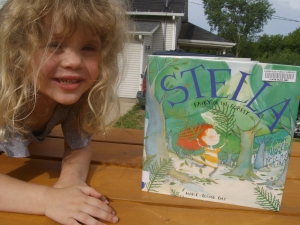 First off I will say that the illustrations in this book are really wonderful, I love the soft colors and all the detail. Ivy likes the book and I think it’s mostly because she likes to find all the hidden animals and bugs in the pictures.

There I said something nice, now lets talk about the text. There is nothing wrong with it exactly, just that yellow butterflies don’t eat butter, blue butterflies don’t eat sky, and please don’t make me accidentally read a book to my girl that says little snakes only swallow little people and that sheep are scary. Granted, Stella is trying to reassure her younger brother who is apprehensive about sheep and snakes but Ivy and I still had to have a talk about how sheep were nice and snakes are cool, and that butterflies drink nectar from flowers.  I also think this book has poor word flow.  Add to that two kids named Stella and Sam and the combination creates something that is both challenging to read out loud (almost a tongue twister) and that misses the lyrical quality that many books have when spoken.

The back flap says that “Marie-Louise Gay is one of Canada’s leading children’s book author-illustrators.” and that her first two books about Stella “…have been sold in more than ten countries.”  This lead me to wonder if I’m just a grump about books sometimes but in quick online search I found a few people who said that the first two were much better than this one. Maybe so but I hope the publisher spared the eight other countries!

Would I recommend it? Nope. I’d love to know if anyone has read her other books and liked them.

Ahhh! Mornings when you can see the humidity! #IMissWinter #WisconsinSummer
Judging by the looks of me and the Steiner I’d say I’m getting better coverage on my kaolin clay spraying. #ItUsedToBeRed #kaolinclay #homeorchard
This is my sigh of “learning how to spray kaolin clay on the apple trees would be easier if I wasn’t having battery issues with the Steiner, my jump pack was fully charged, I had ever used the big sprayer on my own, I wasn’t confident we are doing it all too late and I think I’ll just lay here under a tree with my new white freckles - and oh look I missed all those apples.” #learningcurve #appleorchard #kaolinclay
Dandelion wishes.
These pictures of Jane just about capture the extent of the happiness at a weekend full of family we hadn’t seen in far too long.
Wait up!!! #tinydinosaur #goslings #pilgrimgeese