Did you know that Ivy loves horses?

She does.  Really, really loves them.

Sometime last winter her Grandma Mary happened to say, “Ivy, what would you do if Santa brought you a horse?”

After a few weeks when it became obvious that Ivy was convinced Santa was bringing her a horse I called up my Mom and yelled at her.

In effort to fix the situation she told Ivy that winter isn’t a very good time to get a horse. Ivy accepted this explanation and our conversations turned to, “…when it’s spring and I get my horse…” which was a problem, but I was hoping she would forget.

Of course she did not forget.

We still don’t have a horse and Ivy still wants one, so when the librarian showed her this book at the library I must have got a bit of a wide eyed panicked look because she quickly assured me it would be perfect.

The girl in the story wants a horse for her birthday,

instead she gets a bicycle. 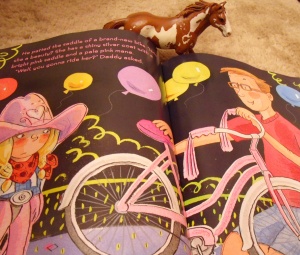 The bike turns out to be a great pretend horse for the “cowgirl,” the last line says: “Yes, sir, I’m a cowgirl from head to toe, and all a cowgirl really needs is a horse…

It did seem perfect for the little girl who really wants a horse but isn’t getting one even though, as she has pointed out, it is spring now.

Ivy listened to the book.  When we finished she pointed at the last page and said “But Mom, that’s not a horse that’s a bike.”

So much for that idea.

Would I recommend it? Yes, while it did nothing to temper Ivy’s horses wishes we did read it approximately 16 million times and she only pointed out the bike/horse discrepancy 14 million. I’m calling it progress.

Ahhh! Mornings when you can see the humidity! #IMissWinter #WisconsinSummer
Judging by the looks of me and the Steiner I’d say I’m getting better coverage on my kaolin clay spraying. #ItUsedToBeRed #kaolinclay #homeorchard
This is my sigh of “learning how to spray kaolin clay on the apple trees would be easier if I wasn’t having battery issues with the Steiner, my jump pack was fully charged, I had ever used the big sprayer on my own, I wasn’t confident we are doing it all too late and I think I’ll just lay here under a tree with my new white freckles - and oh look I missed all those apples.” #learningcurve #appleorchard #kaolinclay
Dandelion wishes.
These pictures of Jane just about capture the extent of the happiness at a weekend full of family we hadn’t seen in far too long.
Wait up!!! #tinydinosaur #goslings #pilgrimgeese