Today we burned Piper’s couch.  No question about it, the couch was Piper’s.  The other dogs didn’t use it, people didn’t use it. It was essentially one gigantic dog bed.  Once she was gone the empty couch was too much of a visual reminder of the big hole in our lives. Nobody wanted to sit on it, and nobody wanted to look at it, we replaced it with a Christmas tree, thew it outside and decided that burning it in honor of Piper was the only thing to do.

And just so you know years of dog drool do nothing as a flame retardant.

As we work on getting along without our big dog we have of course not forgotten our other two. But Uncle Weasel puts it something like this; once you have that super, special, great, fantastic dog, there is a really good chance that no matter how wonderful the next one is, it won’t be worth more than a pimple on the butt of the first. He’s eloquent isn’t he? Eloquently stated or not, it’s a truth that even Ivy recognizes. Or as she said to me just minutes after we said goodbye to Piper: “It’s OK Mom, someday Trip will be a good dog too.” I’m sure she’s right. Currently Trip is a goofy, loveable, trouble making puppy but someday he’ll grow up into a good dog. He’s just not quite there yet, for instance look at this picture: 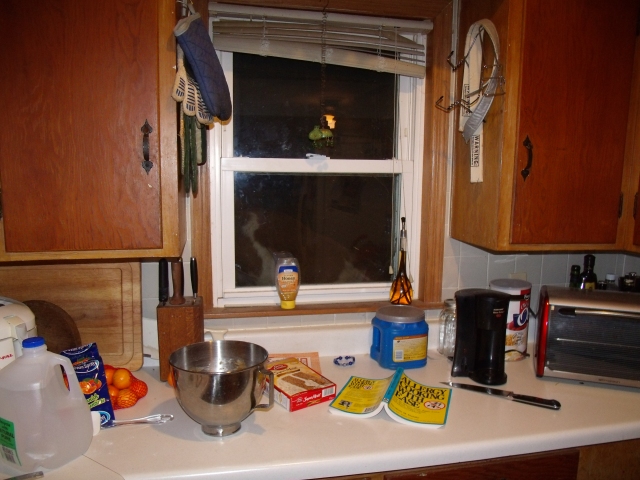 No, you’re not supposed to be looking at the fact that I have an open Allergy Free Cooking With Ease cook book and a box of spice cake mix on the counter at the same time. It’s the puppy on the other side of the window I’d like to draw your attention to.

Notice how he’s in the window?

Notice how you can’t see his head and his butt is suspiciously high in the air?

Yup, he’s digging a hole in my window box.

Someday he’ll be a good dog.

#sheep
The combined pack of six. One has always got to be different… #dogwoodbrittanys #brittanyspaniel #lakelife
On July 26th, 2022, Jessie Stevens forgot what month it was. However back in 1873 her Great Great Grandfather Richard Connell went to lodge in the evening and in 1874 he went to Chilton. #newpostforaccuracy #whatmonthisitanyway #thingsyoufindindrawers #familyhistory
On this day in 1874 my Great Great Grandfather Richard F. Connell purchased dry goods. #thethingsyoufindindrawers #familyhistory
The blurry bedtime goose parade. #pilgrimgeese #nighttimechores
We saw the truck and tractor pulls at the county fair. Jane is enamored, John less so… #outlawdiesel #countyfair