We were invited to a friend’s house for dinner and a magic show. Masterminded by their oldest daughter, (who is a few years older than Ivy) it was quite a show. There were tickets, colored lights, card tricks, assistants, disappearing quarters, costumes, rope tricks, audience participation and small red balls that seemed to have a life of their own, all delivered with a remarkable amount of showmanship.

Needless to say my kids were enthralled and amazed. The entire drive home I heard about the magic show and this morning I was pulled upstairs to be treated to Ivy’s first ever magic show.

There were play-mobile figures that appeared and disappeared.

There was a  trick “wand” that, while clearly copied from a magician we had seen early in the summer, was executed hilariously. 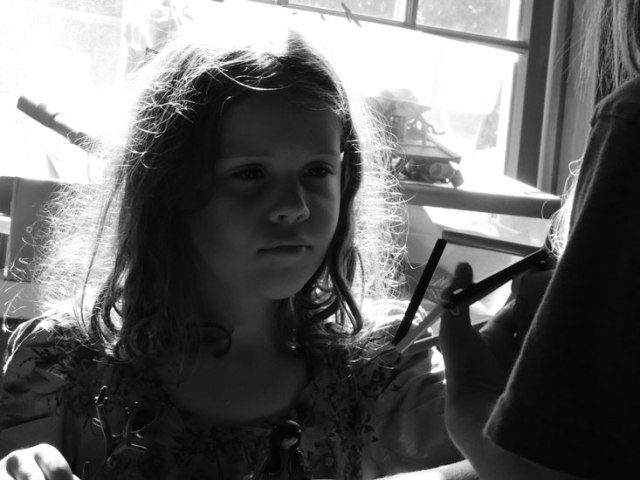 And there was a lot of under the table work and closed eyes from cooperative audience members.

At the conclusion of the show Ivy admitted to me that she was just hiding things under the table. I suggested that perhaps she could ask her friend to show her a trick. Ivy was quiet, then said with a sigh, “Yeah, maybe one day I’ll have a real magic wand.”

And there she had me speechless.

Unsure whether to find an easy sleight of hand to teach her to bring a smile back to her disappointed face or support her belief in the magic of it all, I simply thanked her for a great show. My decision was promptly rewarded with a big smile and news that she’d be performing again tomorrow, when Dad was home from work.

There are those that can paint without making a mess. I am not one of them.
Can’t beat that fall blue! #nofilterneeded #fallinwisconsin
Picking dried beans with Clara when I noticed the color of the pumpkins popping against the dark sky. Moments later we were running for shelter as we heard the wind hit the trees and the rain started dumping down. Our dried beans are not yet what one would classify as… dry… #driedbeans #storm
#fall
19 years. Still my favorite. #happyanniversarytous
They are off! 5th, 7th & 10th. And it turns out you can get a brief smile from clara on the first day of school… right after she bonks her sister in the head. #firstdayofschool #obligatoryphoto