The Slapstyx was written for 8-10 year olds so, of course, I had to read it aloud with all my girls (ages 3, 5 and 8) to see what they would think.

I, as the adult, liked the set up of the book. The ocean is being harmed by super strong, super bad cleaning products and two sisters need to help stop it. That on it’s own could have been a bit much for young girls. BUT if the super cleaner is full of dark magic, the goblins are making the dirt and the dolphin spirits are getting hurt by the overfed plankton monsters. Well, that makes it a lot more approachable and fun!

The three year old, was interested in the mermaid type creatures (dolphinae) and that’s about it. She is three and there’s no pictures, what can you expect?

My five year old snuggled in very close during some of the goblin encounters but was always the first to want to hear what happened next.

The only reason she was the one begging the loudest is because the eight year old kept going to bed with my kindle to read ahead so she already knew what happened next, but she sat at attention to listen every night! 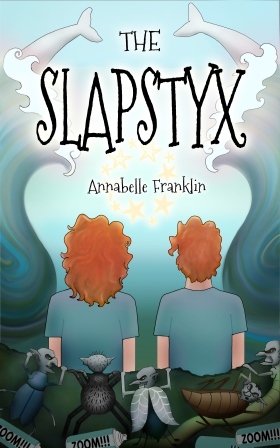 Would we recommend it? My eight year old girl says girls in her class would like it because it has mermaids in it and the boys would like it because of the goblins. All the girls agreed that the goblins were a little scary, though never scary enough to stop reading. But by far the best recommendation comes from my five year old. We had two chapters to go when she said, “Mom, can you finish the book tonight and then read it again?” a sentiment that was silently echoed by her older sister who took the book off to bed to re-read after we were done.

5 comments on “The Slapstyx by Annabelle Franklin”