It wasn’t intentional, raising such a meat lover. It just sort of, happened.

I mean, it’s true, I never ate anything green until I was 12, , 30, but vegetables now routinely infiltrate our meals. And, along side those much contested vegetables are the animals. Birds we’ve been out hunting go straight to the table and everyone agreed that Archibald tasted delicious. So while vegetables have often been a sore subject around the dinner table, the girls have grown up knowing where their meat came from and occasionally what it’s name was. Something that turns others’ stomachs has been a fact of life for the girls for so long as to be a non-issue.

Now deer season and the source of most of our red meat for the year has arrived. Personally, I have yet to be convinced that waking up early and sitting in a tree in the cold would be a super fun plan, but one morning John left the house to do just that. When the girls asked where he was, I told them he was out hunting and maybe, if we were lucky, he’d bring a deer home

“Yay for meat!”, she cheered as she jumped up and down.

I guess, thinking back to her involvement last year, I shouldn’t be surprised. 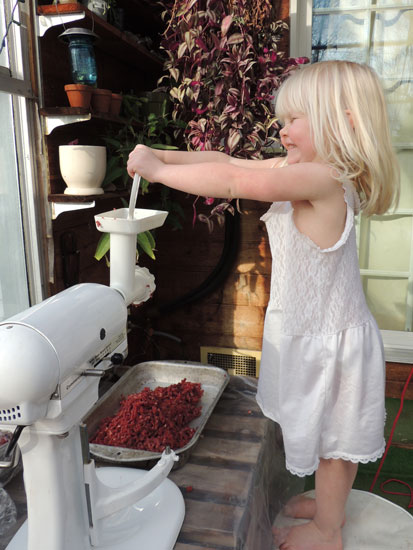 The picture might be a year old but she’s lost none of her enthusiasm for the rewards of deer hunting!

14 comments on “Three Cheers For Meat!”