I’m the terribly unsentimental mother who says the appropriate things about the priceless pieces of artwork given to me on Mother’s Day and then leaves them on the table for everyone to look at. I do this knowing full well that they will be ripped, spilled on, chewed on by a cat or eaten by a dog if we just wait a few days and then I can burn them guilt free in the wood stove while no one is looking. (Stop. Don’t judge. Don’t judge until you’ve been buried in your own flood of priceless artwork that required each kid less than two minutes to make. And if you are, and you’ve kept every paper your kids have given, kudos to you. And please be careful, those stacks of paper you are saving are no doubt reaching fire hazard level.)

But this year my Mother’s Day gift from Jane draws my eye every time I walk by it. I think about it almost daily when she and I are having discussions. It’s taken up residence on the wall in my office rather than someplace the dogs would chew on it’s popsicle stick frame. It is truly the most memorable gift she’s ever given me. It might even be a keeper.

Not because it’s so cute, or because I want to remember just how little and cute Jane was in the picture when it was taken or because she did such a nice job decorating it. No. It’s a keeper because I shake my head in incredulity every time I pass it. 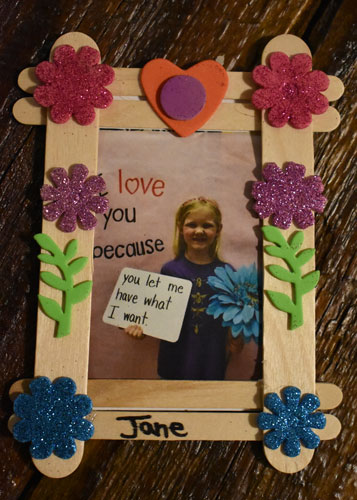 “I love you because you let me have what I want.”

If you know Jane or you’ve been around here enough you may have gathered that she’s convinced she is something of a princess. This is not a character trait I try to encourage, quite the opposite, but I seem to be having limited success.

John saw her gift to me and jumped up and down going “OOO!!! OOO!!! You are the one giving her what she wants!!!” attempting to lay the root cause of our princess child’s behavior at my feet.  I rejected that assumption and I have a story to prove that I do not in fact let her have what she wants, a morning story…

Here is how basically every school day Jane has ever been a part of has gone.

Me -“Jane, it’s time to get up and come down stairs and have breakfast.”

Me-  (A bit later) “I’m making oatmeal/eggs/waffles for your sisters do you want some.”

Me -” Okay, well come down and eat something before you run out of time!”

(Then yesterday’s chosen clothes are no longer fashionable/comfortable/fit and she has to find new clothes. I encourage her to hurry so she has time to eat.)

Me- (eventually) “Jane your oatmeal/eggs/waffle/food of some kind is ready.”

Then she goes and finds socks/pants/shorts/some other shirt/a ponytail holder while her sisters eat their breakfast, put their shoes on and get in the car. Occasionally I give her a count down of minutes remaining and remind her about eating.

Jane finally appears at the door. Then she cries about something.  Anything really, actual substance for cause of crying seems totally unnecessary. Crying is followed by demanding to know where her breakfast is, citing that all she really wanted was eggs/oatmeal/last night’s leftovers. I ignore all this and push her out the door handing her a granola bar to eat in the car.

Then I drop them all at school .023 seconds before the bell rings and the older kids get out of the car yelling at Jane for making them late – again.

90% of the school days this year Jane has run out of time to eat at home, demands to be allowed to sit and eat some random breakfast item at a time when we should be leaving and instead grumpily eats a granola bar or some such item in the car on the way to school.

Recently when I tossed a granola bar into the back seat she lost it.

All I could do was look at Ivy in the seat next to me with wide eyes and the two of us burst out laughing. (That didn’t make Jane feel better btw – put me in the terrible mother camp for that one, but it was early and I don’t do anything well early.) “I’m not sure either Jane, I’m not sure either.” I finally got out through my laughter.

Now everyday I look at that… “you let me have what I want.” and smile. 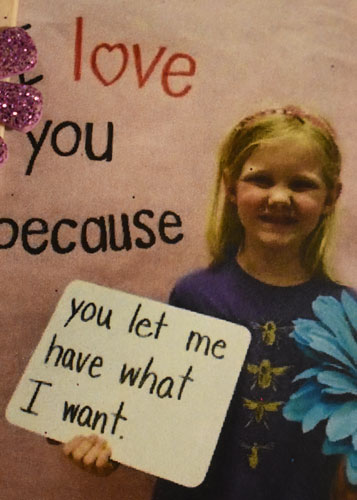 Maybe it’s her way of wishful thinking, if she believes long enough, and claps hard enough it’ll come true. In the meantime I’m going to keep it on the wall as a reminder that this girl may always, deep down, know that she is a princess no matter how the world treats her.

Sam is getting on the ice bath band wagon. It counts if you bathe in a heated bucket while out in single digit weather right?
Happy birthday Ivy!!!
Mantle decorations.
Morning feelings.
A fun Iowa pheasant hunt with my mom. No birds were harmed through our efforts our legs on the other hand may take a few days to recover. #callitascoutingtrip #pheasanthunting #postholingbuildscharacter
Early Christmas morning and the aftermath.