Jane has been using a scoot bike for the last few years.

A scoot bike, for those of you who are not familiar, is a bike that has no pedals/gears/etc (some people call it a balance bike).  Kids can learn to balance and steer while they push themselves along on their feet Fred Flintstone-style. Jane was a master scoot biker but until this last week was completely unwilling to make the transition to *gasp* *shudder* *panic* …pedals.

But, this week, she, with help of a ridiculous purple Disney princess endowed bike (thank you Grandma Mary) was convinced to give the pedals a try – sans training wheels. There was panicking. There was whining. There was moaning. There were two really unconcerned and unhelpful parents because they had seen her navigate the downhill slope of our terribly rutted gravel driveway on her scoo

t bike and she was going to be fine as soon as she tried it.  Twenty min. later Jane was riding a real bike. 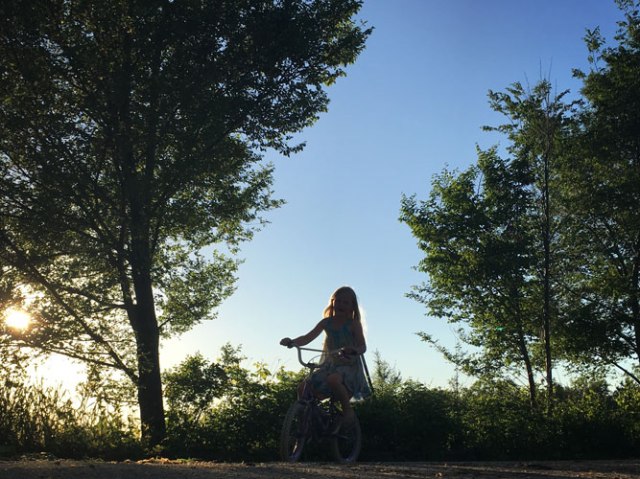 An hour later she called me out to watch.

Personally “Mom, watch me!” inspires feelings of dread and desperate wishes to have something, anything, else to do. But not this time. This time I was excited for her. She was riding a real bike.  With pedals. It’s a big milestone. I willingly went to the driveway to watch.

“Mom, count how many times I can go around the circle.”

(the circle being the small paved area in front of our two-car garage.)

I was still proud of her.

I was still proud but the novelty had worn off.

I sent Clara for a camera so I would have something to do. 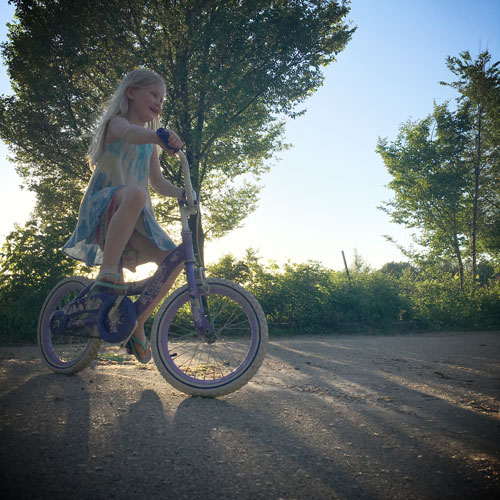 I started daydreaming about setting time limits. As in, “Yay! You learned something new, I’ll be encouraging that new skill for the next five min and then I’m moving on. Ready… Go!”

This is right about when Clara, also bored out of her skull wanted to show off her bike riding skills too. Complete chaos ensued. Bike crashes, screaming, fighting, gravel needed to be brushed out of palms, the whole nine yards.

The dust settled, and there was Jane, still riding her bike and also demanding the entire driveway to herself.

“Fine. You can have the whole driveway but I’m not watching anymore after one hundred.”

My feelings of pride were lessening, the novelty was gone and my encouragement was getting mighty thin.

“Aren’t you going to keep counting?”

Moral of the story: “Watch me” never, ever, ends well for the mother.

When the snow between the beaten paths is really deep you’ve got to get your tongue involved to make it through! 😂 #tongueouttuesday #dogwoodbrittanys #brittanyspaniel #wisconsinwinter
That feeling of pride and resignation when you realize that despite the fact that you are forty years old your mom is still more badass than you and probably always will be.... Just over 26 miles in just over 4 hours and then she went up and down a few hills with her grandchildren before heading home for lunch!
Warm enough for jumping! #trampoline
Clara and the call duck. Because I take pictures of more than just old boots. #callduck
Shoe goo-ed and good as new... ish... Okay fine. Perhaps my 12 year old, best boots I’ve ever, had need replacing as many of you have pointed out. But since these no longer come in my size 😒 I’m open for suggestions on your favorite hunting- hiking -warm toe-blisterless-tromping through anything-frozen chicken poop kicking-that’ll last another ten plus year boots.
Get a turkey they said. It’ll be fun they said... and that’s why I spent my afternoon crawling under the chicken coop ripping out a frozen hay bale one handful at a time so the silly bird who who crawled through a tiny hole all on his own could find his way back out. #notalotofpeoplesaidit #turkeyproblems