I was in town Sunday night when I got a call that Jane’s alarm clock had broken and that she would like to talk to me.

Jane then very politely requested that I go to the Dollar Store in town and buy her a new alarm clock, “But not one of those plain black ones with all the buttons like yours. A unicorn one.”

When I explain that the Dollar Store was unlikely to be open, (think small town Sunday night, the grocery store was closing in ten minutes and the gas station only had another hour) and that even if it was, it was highly unlikely that I would find a unicorn alarm clock at the Dollar Store (that being a weirdly specific request that I’ve never even seen before, much less at our, nice but relatively small local Dollar Store).

Jane heaved a sigh out of her little seven year old body that rivaled that of the most put-upon mother and said. “Can you just make sure it’s girly then.”

Up a creek I would have been, except that I was at a friend’s house who happened to have an old unused alarm clock as well as a resourceful high schooler. Her daughter kindly went to work printing out pictures and created the most flowery, girly unicorn alarm clock that has ever come out of our little town after dark on a Sunday.

While I was sure it wasn’t quite what Jane had envisioned, it was pretty impressive, except for one thing, it only beeped.

And so, despite the fact that Jane has only used radios as alarms in the past ,when I arrived home, well past her bedtime, (girly, unicorn alarms take a bit of time to create) I set it up anyway.  This morning when my own radio alarm sounded I headed upstairs to see how Jane’s “surprise” alarm clock worked out for her.

“Mom, it looks really pretty but it makes a bad noise. When I woke up this morning I was screaming.”

I feel it needs to be explained here that Jane wakes up earlier than her sisters or me because it takes her 57 times longer than us to get ready. I give her an extra 30 minutes.  Sometimes it helps. And sometimes, like this morning, John is up getting himself ready.

Thankfully he was able to turn off her alarm clock, show her the girly pictures and calm her down.  Now despite the fact that she disparaged her wonderful creation as being “an alarm clock that Granny would use” (for reference Granny is her Great Grandma, so I think she got that spot on) she happily set it tonight before bed and double checked that she knew how to turn it OFF when it makes that bad noise again in the morning.

I can only conclude from this alarm clock fiasco that unicorns are indeed magical beings. How else would Jane have accepted a machine that makes a noise so irrefutably terrible that it woke her up screaming as her new alarm clock?

Maybe you, like the mistaken boy in this story, think you want a unicorn  – but you don’t. 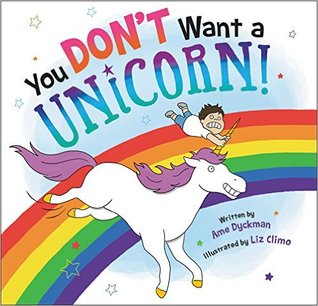 We read all about those rotten unicorns, and trust us, you really don’t.

Would I recommend it? Well, if you are unconvinced and still want a unicorn you better read it so you can save yourself from the housebreaking woes, the shedding and the jumping…. oh the jumping…