I like thrillers. A good dose of running-in, guns blazing while the world blows up, just as the good guy outsmarts the bad is good for the soul…  Ok maybe not good for the soul, but certainly good fun.

But in your typical thriller those good guys, can be a little, well, male. They seem to like to swear a lot and there’s a lot of talk of, to put it not near as bluntly as they seem to, boobs. Throw in the manly stuff that men do and women roll their eyes at and I’m sure it’s all quite realistic when you are down in the trenches with the fellows. But that eye rolling us women do? That’s realistic too.

In The Cull, a series that’s as suspensefully gun blazing as one could wish for, the two main characters are ladies.  Ladies, I might add, that can get by on a reasonable amount of swearing. And between their super brains and super computers, general kickassedness and sass, those typical male protagonists hardly stand a chance in a contest of pure awesomeness.

But that’s not the point.

The point is that unlike many women featured in thrillers, these girls have two things going for them. First off they have, so far, not fallen head over-heels for some hunk they are partnered with. Because once someone starts doing that, then they require rescuing and before you know it the whole world is going to shit they are stuck on a ledge over a giant void and they choose that moment to start kissing.

And these ladies from The Cull actually excel at what they do because of their skills instead of getting by on dumb luck and hunky male backup.  Two women, getting the job done with a bit of giggling that the men don’t understand.

Despite the look of their covers… 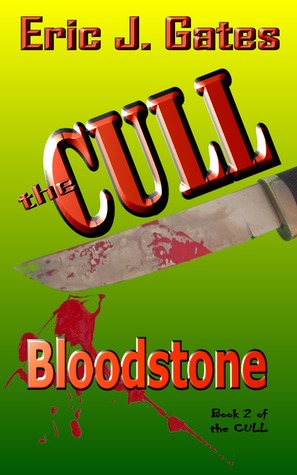 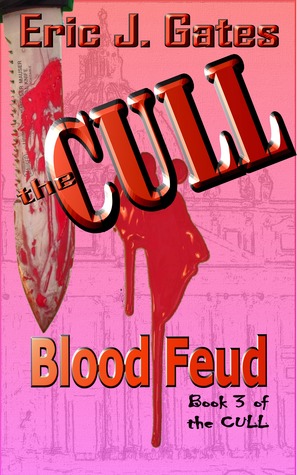 …I’d call them thrillers for women.

Also, if you are going to have a psychopathic vampire in your book, I appreciate that they are given a sense of humor and a good Irish Brogue so they can use the phrase “me darlin” often.

Would I recommend them? Yes!

Bloodstone is the second of The Cull series.  Not as edge-of-your-seat-I’m-never-going-to-sleep-again suspenseful as the first but still plenty of drama and lots of plot thickeners. Good suspense, in a way that had me avoiding responsibilities to keep reading and yet still let me sleep at night.

Blood Feud continues the storyline and as the characters continue to develop so does the reader’s knowledge of their “grey” sides- nothing is black and white after this one! I read this waiting in line at the DMV and found myself in the unusual position of wishing the lines were longer!

There are two more books coming and I’m ready and waiting to hear what these ladies do next!

5 comments on “The Cull – Bloodstone and Blood Feud by Eric J. Gates”