John and I were able to leave the kids and the chickens and the ducks and the geese and the cats with a number of extremely wonderful friends and family (particularly John’s mom who watched the girls for a whole week!) and take a trip, just the two of us, to North Dakota.

But, in planning a trip to North Dakota with five full days of hunting, we looked at our two dogs, the completely fantastic one and John’s too. And knew we would need more dog power if we wanted to spend all our days in the field.

Fortunately, when my immediately family gets together, we come trailing ten dogs. So we started the debating and the discussing the pros and cons, ages and attitudes of various dogs that we might be able to borrow.  John decided to take my Dad’s dog Buzz, who he’s been able to bring on many hunting trips before, and I decided to take my brother’s dog Sunday, litter mate to Trip.

“You want Weasel?!?” came out of more than one person’s mouth.

(Weasel is his other name, trust me, it’s fitting.)

Yes, I did want the Weasel. He wasn’t in the camp of old dogs that can only hunt part days and then needs pain meds for arthritis. He’s got drive that exceeds his common sense. And when he’s on… he’s amazing.

Of course Sunday and Trip are also the puppies that fought as 12-week old puppies – Cain and Able style. Now that they are grown they mostly circle and growl but, as remarked on the last hunting trip after they were ripped apart, “They don’t start fights anymore but they sure will finish them.” Even when Sunday is having an amazing day he requires a whistle and a shock collar at the ready- just for a reminder that he’s hunting with you. And when he’s not having an amazing day…. he looks like a remorseless eggbeater churning up the field and driving away birds far in front of you.

But I still wanted Sunday.

And so for a week I hunted with the two brothers. Swapping them in and out to rest them, letting John hunt with Sunday when he needed to. Learning more of my dog’s habits and tells, and learning Sunday’s anew.

Trip doesn’t have quite the drive of Sunday but he has enough. Enough that no matter how pathetic he walks while loading up into the vehicle, he runs like it’s the first time out once his nose hits the field.  And Trip is also a high maintenance dog, happy to listen to whistle commands, perhaps happier still if you left your whistle and home and just let him fly through the field at will. 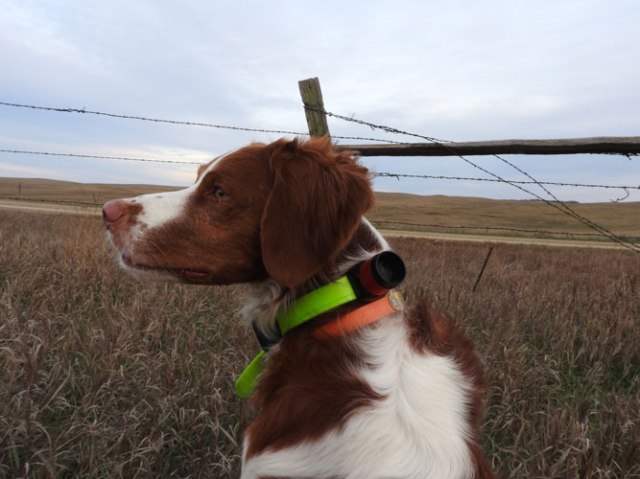 But after that their hunting styles diverge. Trip has subtlety.  The pheasants we were after run on the ground while they have cover before being forced to fly. Trip would stop on a soft point, get his sneak on and move up, either stopping on his own or when I told him to wait for me to catch up.  Then he’d be off sneaking down the field after the bird again until it would either hold still or more often, flush up in front of us. One day Trip and I followed a hen pheasant a half mile through a four-foot wide strip of grass to have her flush wild on the far side. He was sneaky, he was subtle, he whoa’ed and listened, he was awesome (of course he was, he’s my dog). There is the little detail about honoring points (Honoring is when a dog stops when they see another dog on point.) Trip … ummm… doesn’t.  But he’s my dog, so he’s still awesome – just ask me.

On the other hand we have Sunday. Sunday has yet to learn the definition of subtle. Sunday runs through the field like a dog on fire. When he catches birds scent that little wiry body you thought was completely wound up, winds tighter.  If the pheasant was sitting still Sunday would lock on a beautiful point. But, these were pheasants, they don’t like holding still. With his nose or eyes on a pheasant running through the grass ahead of him, Sunday would go into crazy egg beater mode; whipping around in circles, bounding through the tall grass, determined to scare the bird into the air or perhaps accidentally jump on it and squash it. On a good day, I could keep him near me and often that thrashing he gave the field would effectively trap the bird between us and I’d get a shot. On a bad day he’d be off and the frenzy would start out of range. Then he would come back, tongue out, laughing saying “DID YOU SEE THAT! Wasn’t that great how I just flushed 67 birds on the far side of this field, there were so many it was amazing!!!” In those fields his name turned from Weasel into something less kind. But even when he’s being rotten, Weasel honors another dog’s point like a champ. 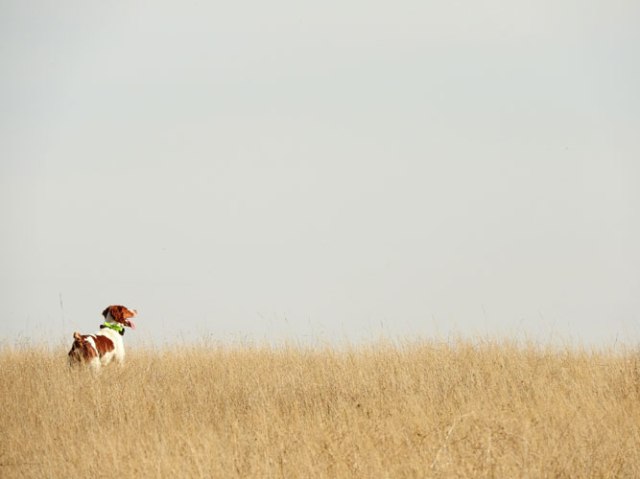 And if you were to be so unlucky as to hit a pheasant that hits the ground running both these brothers will run it down, no matter how far it goes, and bring it back.

I started hunting because I love to watch the dogs do what they were born and bred to do. While I could have chosen to hunt with a pair of dogs that were a little easier to hunt with, the exuberance with which these two brothers ran through all the fields couldn’t help but make me smile and walk a little faster myself.  The dogs never held it against me that I whistled them back when they got too far (only when I missed another shot) they’d just swing by me for a quick drink of water and go again, noses to the wind to run some more.

So, yes I did take Weasel on our hunting trip.  And next time I can find a way to do it I’d happily take these two brothers, whistles, shock collars, growls and all out with me again.

Because by the end of a long day of hunting we were all so tired and happy that when those soft, half-hearted growls would rumble between them…

…those brothers didn’t even bother opening their eyes.

7 comments on “The Brothers”

I spy French onion soup. Or perhaps part of a fajita... maybe salsa ingredients... #onionsprouts #seedstarting
When the snow between the beaten paths is really deep you’ve got to get your tongue involved to make it through! 😂 #tongueouttuesday #dogwoodbrittanys #brittanyspaniel #wisconsinwinter
That feeling of pride and resignation when you realize that despite the fact that you are forty years old your mom is still more badass than you and probably always will be.... Just over 26 miles in just over 4 hours and then she went up and down a few hills with her grandchildren before heading home for lunch!
Warm enough for jumping! #trampoline
Clara and the call duck. Because I take pictures of more than just old boots. #callduck
Shoe goo-ed and good as new... ish... Okay fine. Perhaps my 12 year old, best boots I’ve ever, had need replacing as many of you have pointed out. But since these no longer come in my size 😒 I’m open for suggestions on your favorite hunting- hiking -warm toe-blisterless-tromping through anything-frozen chicken poop kicking-that’ll last another ten plus year boots.