Winter is winding down. We still have a foot of snow on the ground and the driveway is still covered in ice but the sun has warmth again and the forecast for the week ahead is starting to lean toward spring temperatures. I suspect by this time next week we will have a whole different landscape out the window.

Looking back I think it’s been a great winter-y sort of winter. We are not blessed here in southern Wisconsin to have winters that automatically come with piles of snow and cold weather but this year we were. Of course this year we also had, according to our school’s superintendent, “an unprecedented amount of snow days” and some people didn’t really like that. Other people complained that they ran out of places to put snow along their driveways and sidewalks, I guess they didn’t like that either.  Still other people liked to share the shocking fact that for a bit it was colder here than in Antarctica (of course it was summer in Antarctica, but people using that phrase don’t like when that is pointed out to them). In any case it was undeniably cold here, the weather powers-that-be called it a polar vortex.

I liked to call it real winter but that made people want to facewash me in that lovely winter snow. Fortunately for me, those were also the people who didn’t want to follow me outside into the cold and snow so I was pretty safe. And yes, it was super cold, like pipe freezing cold and “Wow, let’s use the infrared thermometer to take the temperature of the toilet seat because I think my butt is freezing to it” cold.  One could be upset by that or you could just relish in the fact that taking the temperature of the bathroom floor vs the toilet seat vs the living room floor vs the woodstove is a fun game to play with the infrared thermometer you always wanted but never needed. Of course that’s just inside the house, the real fun was outside.

Going outside when the windchill drops to 40 below (for my international friends that’s the same in Fahrenheit and Celsius) is an adventure. There are layers and layers to put on and eyelashes try to freeze together and your boogers certainly freeze inside your nose and if you spill water on yourself while hauling it to poultry it freezes solid before you get inside and, if you really get a good gust of wind on your forehead, the cold can cut through all your hats and layers and give you an ice cream headache just from standing in it.

It’s amazing when it gets that cold!

Reading back on that I fear I have failed to relay the amount of fun that is. Maybe you have to be a certain kind of person to find the fun in just being when the air makes your face hurt. But what can I say, I’m that person. 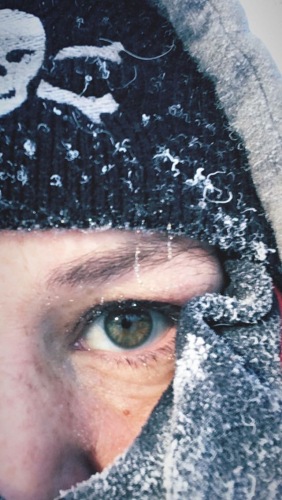 My (possibly weird) love of the cold is not the point though. The point is, it was quite cold and wintry here.  However as cold as it was outside, I maintain the odd truth that the coldest place around (certainly colder than Antarctica was this February) are gas station bathrooms. How they manage to keep their water running at such frigid temperatures is clearly some form of gas station magic that us mere mortals are not privy too. As much time as I spent outside in the “dangerously cold” weather I was never as cold as I was in a gas station bathroom. In fact I’m willing to put forth the theory that it’s possibly the weathermen had it wrong and this “polar vortex” situation was really just what happens when too many gas station bathroom doors open simultaneously.

How about you? Were you any place colder than a gas station bathroom this winter?

13 comments on “Coldest Place on Earth”