Some people can read stories in the snow. For those who knew where to look our first snowfall of the year told a story. And, like any good story it starts with a villain.

The fox came out of the trees trotting toward the chicken coop.

Bold as brass he jumped right on the chickens front porch. There he did what foxes do at chicken coops.

And the trail of feathers told the tail.

Just around an apple tree the fox tracks are joined by another set as our hero joins the chase.

The tracks lengthen as the dog runs off after him. And what is this following behind?

Why it looks like the track of a crazed woman, owner of both dog and chicken who is tired of her birds being used as a fox buffet and willing to fly through a snowfall barefoot with her dogs to stop it.

Sadly. Our tale is a tragic one for the chicken as the fox disappeared through the snow, prize in mouth, despite our hero’s best efforts.

The snows have continued coming since the story began and on each fresh white page the story goes on, another lost chicken, a run in with the turkey that the fox lost and who knows, maybe one day the story will have a happy ending…

… from the chickens point of view.

This morning Jane and I went for a beautiful walk with the dogs in the snow. We slipped and giggled, caught snow flakes on our tongues and came back soaking wet.

Tonight Clara and I slogged through the rain to visit Granny. We slipped and grumbled, squelched through mud puddles and came back soaking wet.

What a difference a day and a degree make.

One April day the girl looked outside as the heavens opened wide and giant snowflakes filled the air. Large and wet they stuck to everything and turned the newly greened land white again.

That night as the girl sat by her fire she pulled the first tick of the year off her dog, and thought to herself, “Spring is super weird.”

Winter is winding down. We still have a foot of snow on the ground and the driveway is still covered in ice but the sun has warmth again and the forecast for the week ahead is starting to lean toward spring temperatures. I suspect by this time next week we will have a whole different landscape out the window.

Looking back I think it’s been a great winter-y sort of winter. We are not blessed here in southern Wisconsin to have winters that automatically come with piles of snow and cold weather but this year we were. Of course this year we also had, according to our school’s superintendent, “an unprecedented amount of snow days” and some people didn’t really like that. Other people complained that they ran out of places to put snow along their driveways and sidewalks, I guess they didn’t like that either.  Still other people liked to share the shocking fact that for a bit it was colder here than in Antarctica (of course it was summer in Antarctica, but people using that phrase don’t like when that is pointed out to them). In any case it was undeniably cold here, the weather powers-that-be called it a polar vortex. 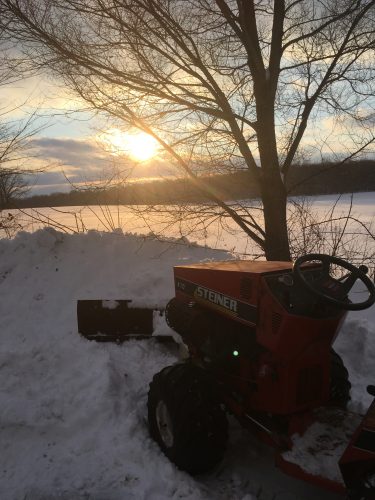 I liked to call it real winter but that made people want to facewash me in that lovely winter snow. Fortunately for me, those were also the people who didn’t want to follow me outside into the cold and snow so I was pretty safe. And yes, it was super cold, like pipe freezing cold and “Wow, let’s use the infrared thermometer to take the temperature of the toilet seat because I think my butt is freezing to it” cold.  One could be upset by that or you could just relish in the fact that taking the temperature of the bathroom floor vs the toilet seat vs the living room floor vs the woodstove is a fun game to play with the infrared thermometer you always wanted but never needed. Of course that’s just inside the house, the real fun was outside.

Going outside when the windchill drops to 40 below (for my international friends that’s the same in Fahrenheit and Celsius) is an adventure. There are layers and layers to put on and eyelashes try to freeze together and your boogers certainly freeze inside your nose and if you spill water on yourself while hauling it to poultry it freezes solid before you get inside and, if you really get a good gust of wind on your forehead, the cold can cut through all your hats and layers and give you an ice cream headache just from standing in it.

It’s amazing when it gets that cold!

Reading back on that I fear I have failed to relay the amount of fun that is. Maybe you have to be a certain kind of person to find the fun in just being when the air makes your face hurt. But what can I say, I’m that person.

My (possibly weird) love of the cold is not the point though. The point is, it was quite cold and wintry here.  However as cold as it was outside, I maintain the odd truth that the coldest place around (certainly colder than Antarctica was this February) are gas station bathrooms. How they manage to keep their water running at such frigid temperatures is clearly some form of gas station magic that us mere mortals are not privy too. As much time as I spent outside in the “dangerously cold” weather I was never as cold as I was in a gas station bathroom. In fact I’m willing to put forth the theory that it’s possibly the weathermen had it wrong and this “polar vortex” situation was really just what happens when too many gas station bathroom doors open simultaneously.

How about you? Were you any place colder than a gas station bathroom this winter?

It’s that problem you have when the day before the ground was solid mud but today it’s all snow covered and frozen.

When you are accustomed to being a glorious white but the mud has lingered and you are are hardly fit to be seen.

When all the puddles and ponds have frozen and all you have left is a water bowl.

And it’s just too small for a decent bath.

I love the winter.

I love the snow and the cold, the skiing and the sledding and tromping about in a winter wonderland.

But I also love the long nights with the extra time inside to play games, read by the fire and even catch a little extra sleep.

When I was outside trying to capture the alternating rhythm in the light on the field for this week’s photo challenge, it occurred to me that maybe part of why I love winter is the alternating rhythm of my days.  With daylight hours spent up and moving in the cold weather and nights reserved for recovering by the warm fire, winter days acquire a rhythm that those long days of summer never do.

Or, maybe, it’s just that I like it when my boogers freeze. 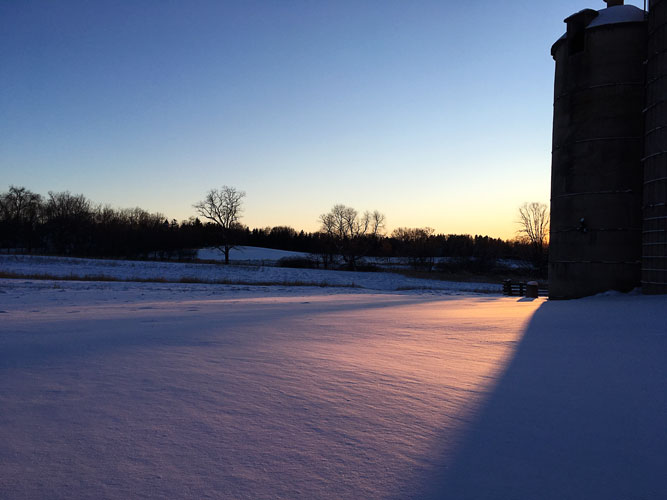 I didn’t quite capture the real warmth that the evening light leaves on the snow.

I can’t quite see that feel the evening has when the snow looks like it’s glowing golden alongside the cool blue shadows.

I missed the wintry wonder of being able to see the warmth of the sun even as your cheeks stiffen in the cold.

But that’s okay, we finally have a winter wonderland outside again and I’m happy to try again tomorrow! 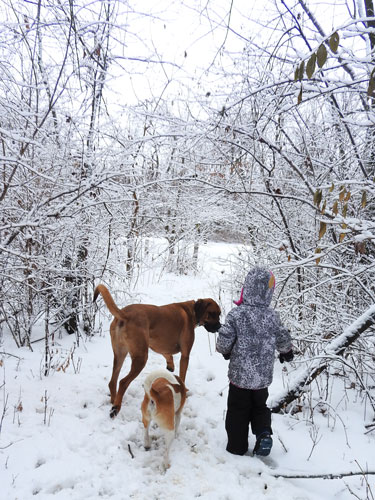 There are all different kinds of snow.

There is the icy, crystally kind that hurts your cheeks when it drives down out of the sky and the impossibly fluffy kind that falls out of the sky in feathery clumps that compact into almost nothing by morning. There are the super cold drifts that squeak beneath your boots and the terrible warmed and refrozen kind that is really just snow shaped ice covering the ground.

The best kind, that never seems to come around as often as you hope, is the wet pack-able kind. This snow, that snowballs and snowmen are made of, shows up on warm days. And those days, when the snow is debating disappearing altogether but hasn’t yet given up it’s hold, those are the days for sledding.

The track becomes hard and packed so you fly down the hill.

And between the climb of the hill and the warmth of the day everyone can stay out for hours. 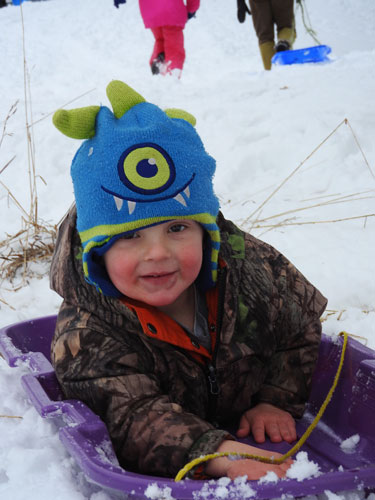 The soft snow that might be turning to slush at the bottom is forgiving of crash landings.

It will melt on your face and your clothes, until snow pants start to sag with the weight of it. 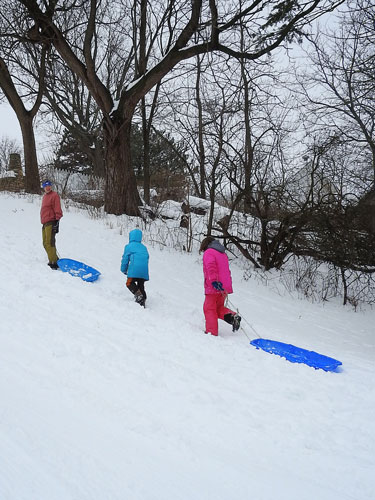 It takes a certain kind of day, a certain type of warmth, a certain amount of snow and a perfect hill. 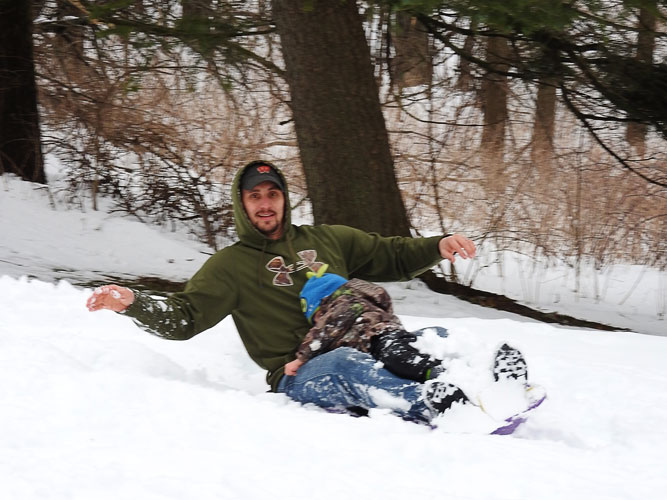 Not just any white stuff will do… 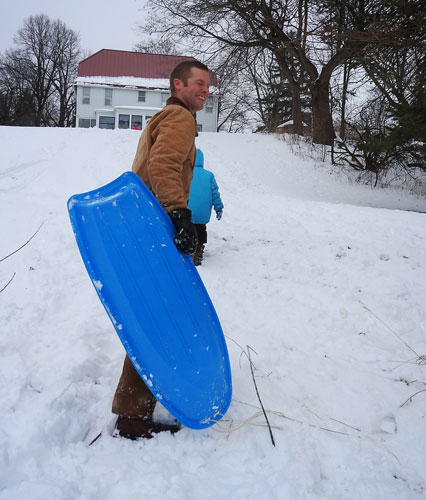 …if you are looking for… 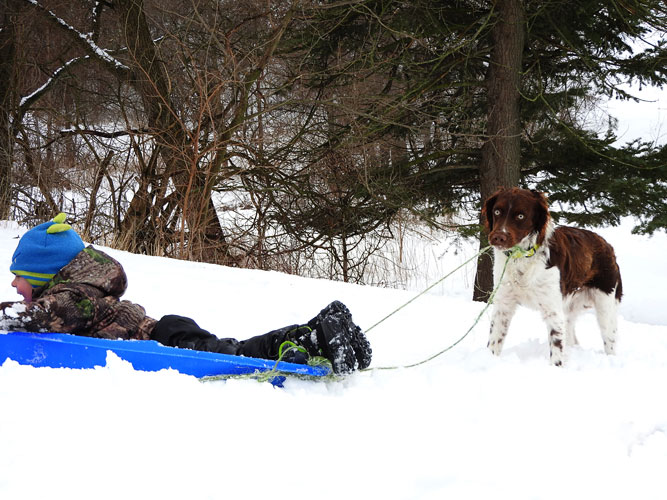 … a perfect day on the hill.