I admit, we call her a drama queen… 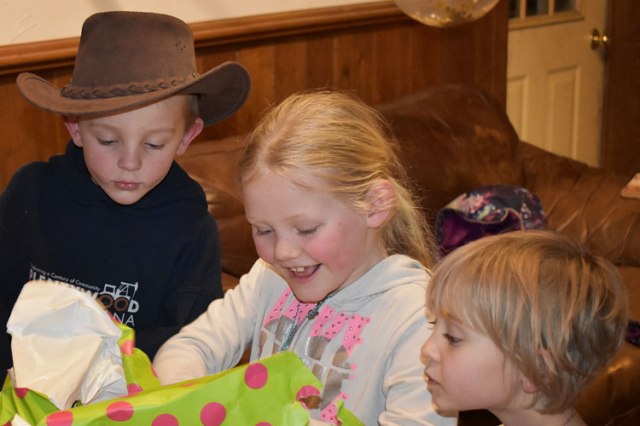 … and we don’t always say it like it’s a good thing. 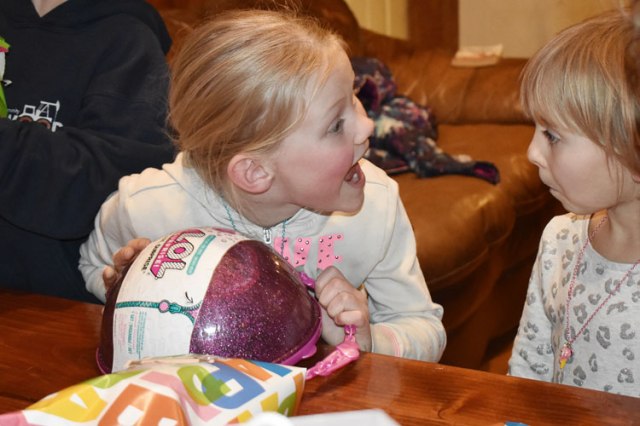 …(well except maybe her cousin on the left there)…

“Well Granny,” asks Uncle Jim, “after 94 years, what have you learned?”

You make all that hard work look good.

…placating smile, too long bangs, events from the swim meet on her arm, dressed inappropriate to the weather and she’s got a pigeon on the table… 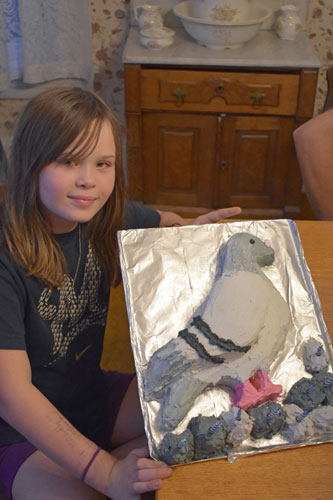 A pile of photos capturing moments from the week.

Moments I want to pause, savor and remember. 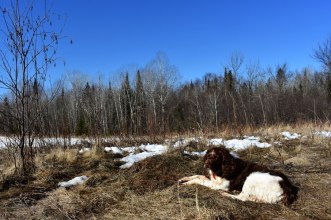 Turk soaking up the sun

Tyler in the steam of the sugar shack 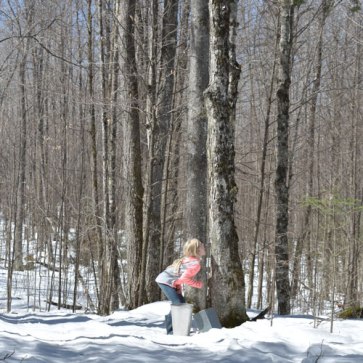 a dubious cast of characters 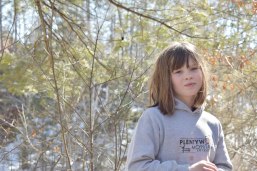 46 Grandma Mary, are you sure about that?

There is no one who makes better happy faces than this girl. 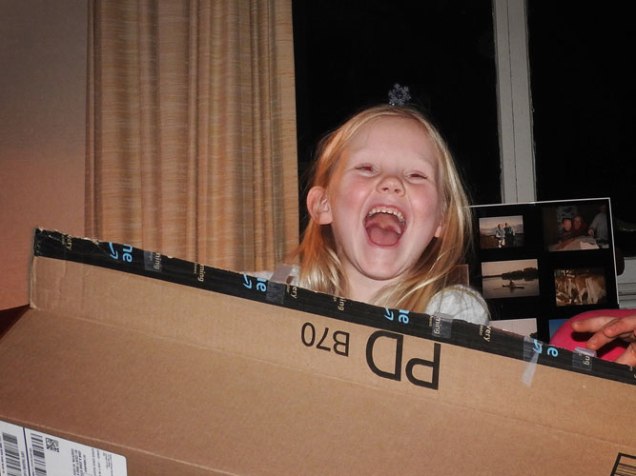 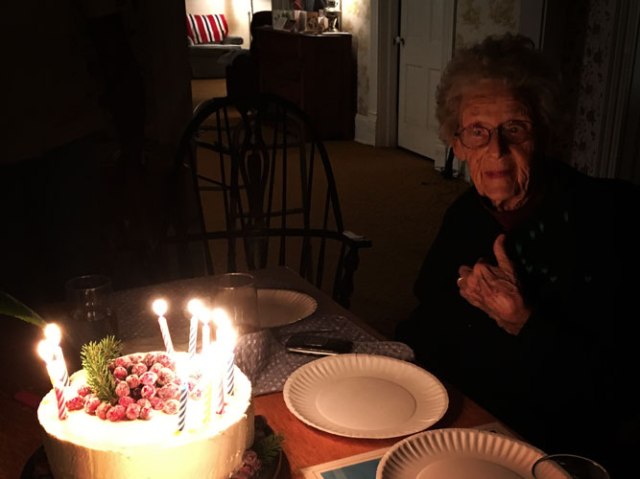 Color – I have couple, teal, blue, green, yellow and purple.

Animal – I have couple, dolphins, bees, foxes (I just like the look of them) and ummm what are they calllled, manatees.

Bug- Bees and earwigs. *laughing* NO I don’t like earwigs!! And that’s when I knew this was going to be interesting…

Food – Lots of stuff, like pizza, spaghetti, kielbasa, the skillet you make, ice cream and candy.

Clothes –Skirts and t-shirts if its summer, but in the winter I like to wear long sleeves, long pants and socks cause I like skating around the house. And that’s where we diverged from list making into a much more interesting conversatuon… 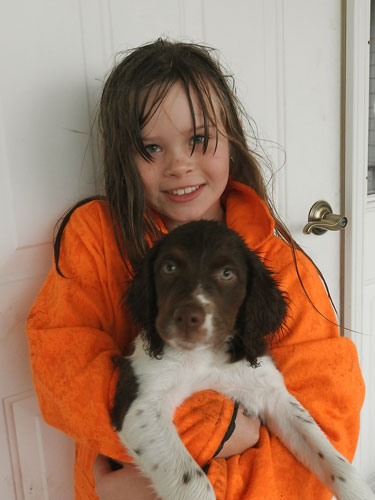 Cat –Gypsy, Cassie, Fiona, Baby, Pester, Ginger, Blacky and Oreo (It seems our youngest cat didn’t make the cut and the last three are kittens her friend’s family “might” adopt. Makes you wonder what Simone did to her recently).

Person – You, Dad, Jane, Ivy, Grandma Grandpa, Grandma Pat, Grandpa Al… Like all my grandma’s and grandpas and aunts and uncles. Lola, Lucy, Brent, Rachel, Macy, Evelyn, Joe… I cut her off around here before she listed everyone she knew.

Me: Do you know what favorite means?

Me: Does favorite mean one or lots?

Me: So, most people think favorite means the thing they like the most.

Clara: Yeah… but I can’t choose.

Alright then. Moving on…

Thing to do –A couple… Like two… Swim and we play on the playgrounds, oh three, and play on the computer, or ipad or phone… or do arts and crafts… I can’t choose!

Thing to do inside – Annoy Ivy. Great…

Thing to do outside – swim

Chore – *laughter, lack of eye contact*  Ummm nothing. – Oh! Clean the pool out cause then you get to be in the pool.

Time of day – Two. I like how we are numbering the favorites now.  Dinner time when it’s close to dark out. And in the morning and at midnight. And how that doesn’t cut down on the number of things what so ever. Or make them factual. She’s a monster in the morning and she doesn’t ever get to stay up until midnight.

Place to go – Umm couple… Like to Florida, to the beach, to Lola’s and to the Cambridge Elementry and the pool house at Lola’s and where I saw the kitties at Lola’s. Lola is Clara’s best friend, can you tell? Also she likes going to school? Judging by her morning behavior, I’m totally suspicious of that.

Song – I don’t really have one… I like… Katie Perry, or Lady Gaga but I don’t like Lady Gaga as much as Ivy. Who does really?

Flower – Three I doubt it. Like the ones that go and are like in the summer… SCILLA! One Ummm what are they called, they are in the summer and some of them have white petals… Oh yeah, daffodils Two and tulips Three and the roses with not a lot of petals cause the ones with tons of petals-*makes a disgusted face* uh ehhh! Four. I’m totally with her on her rose feelings though.

Farm Animal – Horses and goats. What? That’s it?

Thing about school – Couple things, recess, snack time – cause she usually reads a book to us, and um um um um I don’t remember. And this Clara is why favorite implies one thing. A thing you like enough that you remember it.

Movie – I don’t have one. Believable.

Thing to do with Ivy – Annoy her. Me: How do you like to annoy her? Clara: By going like, “Ivy , Ivy, Ivy” and if she says “What?” I just keep saying, “Ivy, Ivy, Ivy…” This explains a lot of the yelling that I’ve been hearing lately.

Thing to do with Jane – Annoy her and play legos. Me: How do you like to annoy Jane?  Clara: Go, “Jane, Jane, what’s that, what’s that, Jane, Jane…” This explains the rest of the yelling I’ve been hearing.

Thing to do with Dad – Couple things, not annoy him. If only that were true… Go to parks with him, play in the garage and make obstacle courses and help him build like sailboats. That would be a reference  to the two pieces of wood she nailed together 3 years ago and dubbed a sailboat.

Thing to do with Me – I don’t know, watch movies. And if you wanted proof that I’ve been a bit stressed and cranky lately there you have it. Like what kind of movies?  We don’t watch very many movies. Selkie one maybe?  The selkie movie was Song of the Sea which was beautiful and she cried through half of it. Again, were you wondering about my general attitude lately?

Book – I don’t have one. This answer bothered me far more than the previous one. You can not like me but no favorite book?!? Tragic!

Thing to do in the car –Color and annoy people. Me: Can you not annoy people on the drive tonight? Clara: Ok, but its what I love to do!

When you get older what kind of problems do you want to help solve? This required further explanation. Her eventual answer: “No.” She creates problems, she does not solve them.

What do you want to do when you are grown up? – Have a lot of cats. But if I get a husband he would have to do the cat litter boxes. This is where I almost swallowed my tongue trying not to burst laughing.

Anything else? –  Candy!- Sour candy! I think that might be it… oh wait my favorite kind of fruit is… I have couple… lemons, limes, apples, grapes, pineapple, watermelon and peaches. Oh, and pears!

But that was all yesterday…

Happy Birthday to my girl who has all the favorites!

That’s a number that scares some people but not my man.

Nope, he’s quite convinced he’s more awesome now than he was at thirty.

And you know what?

There are a slew of logical reasons why having animals is a pain in the behind and no sane person should ever want to keep a menagerie like we have.

But yesterday I got to wake Clara and Jane up by introducing them to a baby duck that hatched overnight. 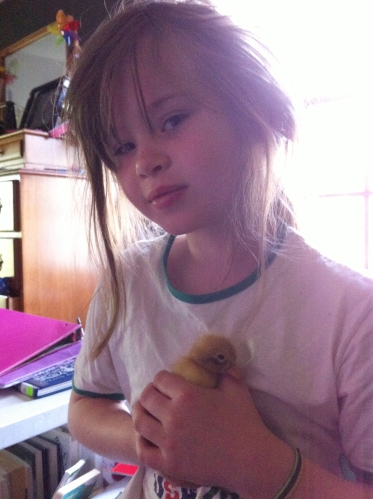 And then today, my birthday, another hatched.

Logic and sanity be dammed…

…raising animals is the best!

Ready for transport from summer rain barrel home to winter fish tank home! #goldfish #rainbarrelfish
Sunday morning storm watch. “It’s like a movie!” #stormwatching #midwestfun
Happy birthday Clara!
Accidentally decorated for fall when I hung up some corn to dry and have decided accidental decorating is probably my only decorating style.
This seems to be one of those days where it may look like I have all my ducks in a row… but I know that I have just as many ducks lost and quacking, laying eggs where they shouldn’t and wandering off by themselves in search of treats. #BadAnalogyThursday #TiredThursday #AnconaDucks #WhoActuallyGetsTheirDucksInARowAnyway #ConcussionRecovery
This is what concussion looks like. You can’t see it but I can feel it.