Last week Ivy sat at the dinner table with an attitude of, shall we say… discontent. John ever the problem solver asked, “Ivy, what brings you joy? What do you like?”

(Now mind you, Ivy has recently discover that she can read my blog. This is a new fact of life that I have seriously mixed feelings about but I can assure you, knowing that my lovely eldest daughter will read this sooner rather than later, I speak the truth and nothing but the truth, so help me God.)

John and I burst into laughter at this totally stereotypical teenage reply, which was of course totally unwarranted because she was only twelve at the time.

But today she is thirteen.

We now have a teenager in our midst. She likes eating, sleeping and even, when to pressed to answer by the laughter of her parents, reading and drawing. 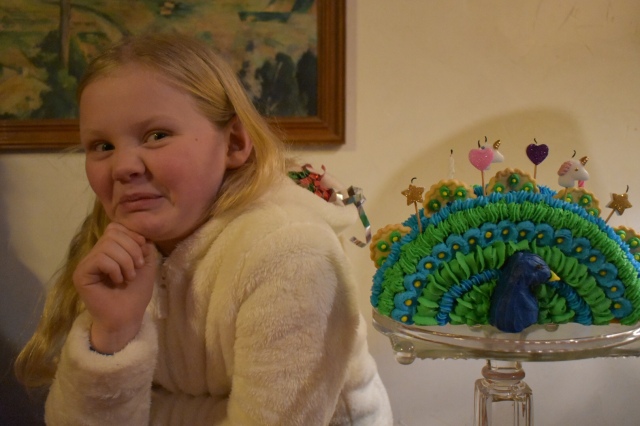 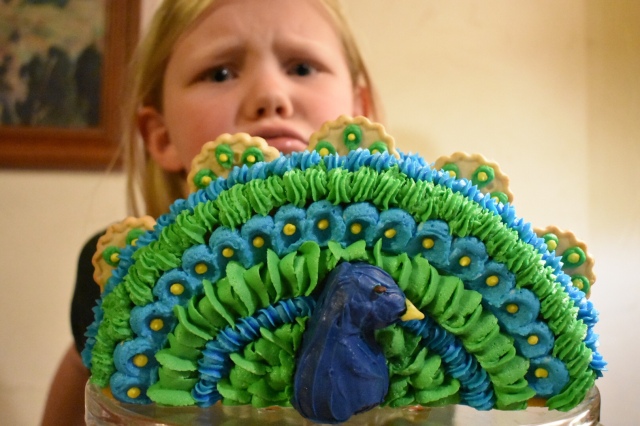 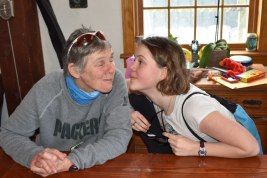 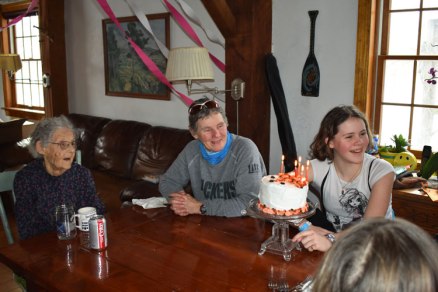 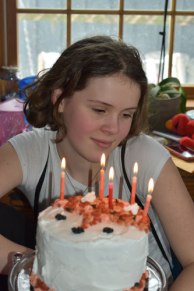 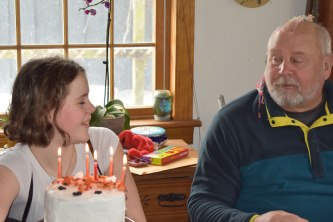 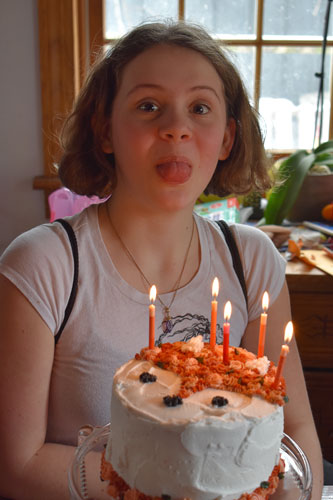 …placating smile, too long bangs, events from the swim meet on her arm, dressed inappropriate to the weather and she’s got a pigeon on the table…

Here there be dragons, but only the sweet ones!

Kids turn seven all the time. 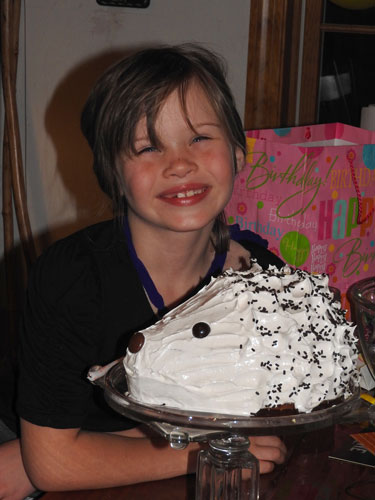 Happy Birthday to a most imaginative girl! 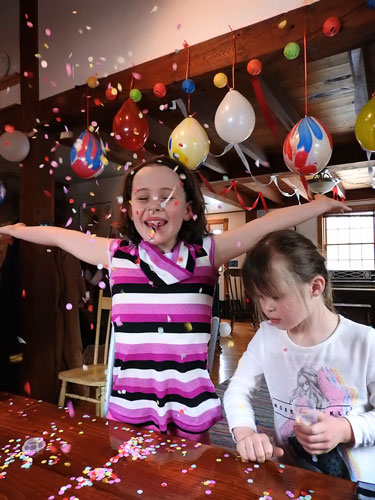 Bring out the cake!

For months Clara has been telling me that she wants “everything bee” for her birthday. 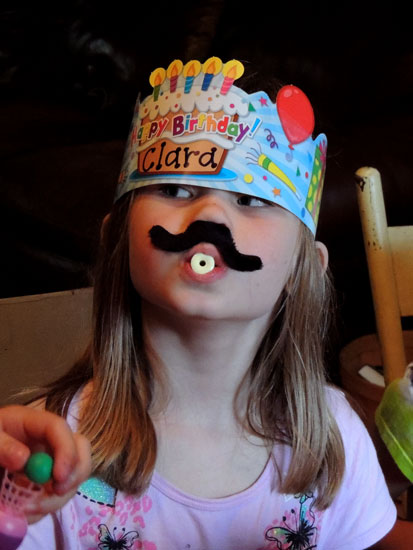 At this moment in time I think it’s quite possible that Jane is too honest for her own good.

I was making a chocolate cake for a friend’s birthday when Jane piped up, ” I help you?” Fellow chocoholic that I am, I knew that “help” did not in this instance mean that she wanted to actually help. But rather, “Hey mom I’d like to sit on that stool and eat all the chocolate that you’ll let me.” Sympathetic to her plea, I set her up on a stool and gave her a frosting beater to lick.  But soon she was eyeing what I was doing.

I’m not going to lie, what I was doing was both interesting and delicious. I was in the final stages of assembling the Chocolate Quake Cake from Sprinkle Bakes. After baking the cake and making the frosting, you’ll have used three(!) full cups of cocoa powder. In making the chocolatey wonder, first you stack and frost two layers like any normal cake but then a third layer is cut up into random chunks and stuck it all over the entire thing. Sounds crazy, tastes awesome. I highly recommend it!

But, back to the kitchen. Jane’s stool is at the counter, just out of reach of the stove where I am working. (Not a coincidence.) Jane turns her chocolate covered face and sees the giant pile of cake chunks I’ve made, drops her frosting beater and asks if I’ll scoot her stool closer. Now I know all she wants is to get within arms reach of the pile of cake chunks which I’ve already started sticking on the cake as fast as I can.  But I ask anyway. “Jane are you going to snitch my cake if I scoot you closer?”  And she, honest girl that she is, says “YEAH!” and I explain (still frantically sticking on pieces) that this cake is for our friend and we can’t eat it yet because we are going to give it to her for her birthday.  But if she can just lick her frosting beater and hold on, perhaps I’ll have a few leftovers at the end.

Jane is two. This schpeal of mine results in nothing but the full on hysterical cry of the deprived child – for at least five seconds – before she sniffs, sobers and asks politely if I’ll move her stool closer. “If I move your stool closer what will you do?” “EAT CAKE!”  Again, we go through it, nope, can’t eat this cake, short hysterical crying, sobering, sniffles, polite asking.  “Sure, I’ll move your stool but you can’t touch the cake.” “I NEED CAKE!” And while I completely understand the sentiment, I repeated that we couldn’t eat this cake – yet. Again with the crying. Again the polite asking. Again the refusal. And again, and again. 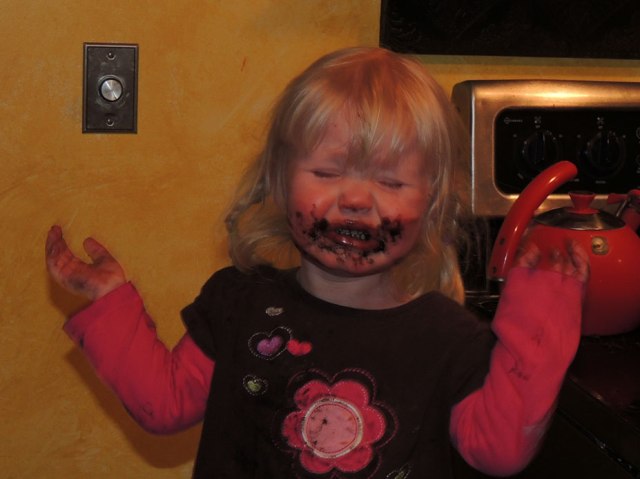 Let me tell you, I have made this cake before and I don’t remember it taking near so long to stick all those little chunks on top last time.

Eventually, I covered the cake, we called in the sisters, had a mini chocolate cake feast with the leftovers and life was good.

You know, I appreciate her honesty, I love that she asks politely even in the middle of a tantrum and I hope she keeps those wonderful qualities for life. But I just gotta think it would have been easier on us both had she just snitched a piece of cake without saying anything.

Today I’m linking up with Manic Mondays where Perfection Pending and others share parenting stories. Not to complain, of course, but to share the crazy!

I spy French onion soup. Or perhaps part of a fajita... maybe salsa ingredients... #onionsprouts #seedstarting
When the snow between the beaten paths is really deep you’ve got to get your tongue involved to make it through! 😂 #tongueouttuesday #dogwoodbrittanys #brittanyspaniel #wisconsinwinter
That feeling of pride and resignation when you realize that despite the fact that you are forty years old your mom is still more badass than you and probably always will be.... Just over 26 miles in just over 4 hours and then she went up and down a few hills with her grandchildren before heading home for lunch!
Warm enough for jumping! #trampoline
Clara and the call duck. Because I take pictures of more than just old boots. #callduck
Shoe goo-ed and good as new... ish... Okay fine. Perhaps my 12 year old, best boots I’ve ever, had need replacing as many of you have pointed out. But since these no longer come in my size 😒 I’m open for suggestions on your favorite hunting- hiking -warm toe-blisterless-tromping through anything-frozen chicken poop kicking-that’ll last another ten plus year boots.