Today’s edition of “Did I Just Say What I Thought I Said?” was an unfortunate choice of words on my part, in that I was proven wrong as the words were coming out of my mouth. 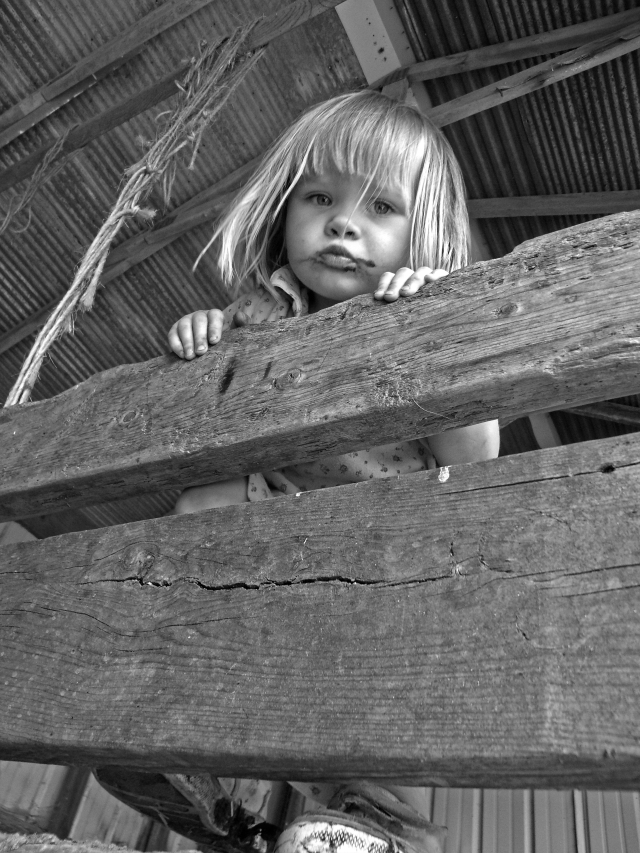 Apparently some members of the family do indeed pee in dog bowls.

I shall be working on both my grammar and toilet training this afternoon, emphasis on the toilet.

“I am not feeding you until you get your dead bees off the table.”

That’s right, I draw a hard line around here.

No lunch until the dead bees are put back in their jar on the counter where they belong.

Did I say hard line? Let me try again.

That’s right, I do draw some lines around here.

Most recently in exclamations that shouldn’t have to be exclaimed we have: 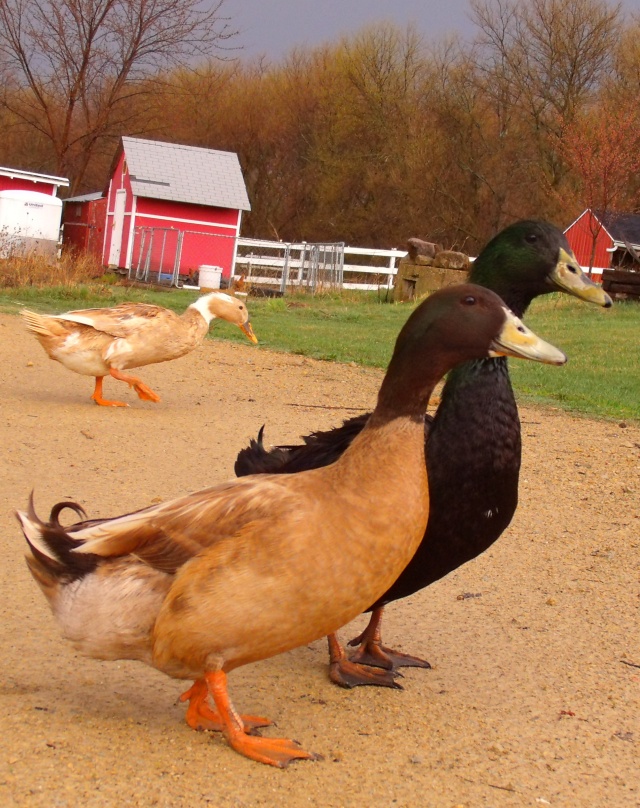 Ducks today after thunderstorm, look at all the green and budding trees!

The biggest difference in today’s edition is that this was not yelled at a kid.

It was yelled at the dog.

A certain brown and white spotted dog who is endeavoring to be perfect but keeps doing things like laying on ducks which is preventing him from achieving that golden pedestal at the moment.

Trip and the ducks (in particular the two in the front of the photo) have been playing since he was a puppy. 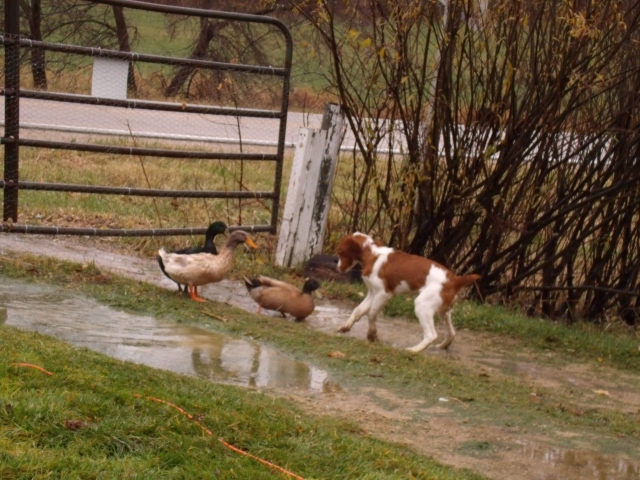 (Yes, my hunting dog plays with the domestic waterfowl. Why don’t you  just go ahead and get all those snotty comments out of your system now, I know you want to.) 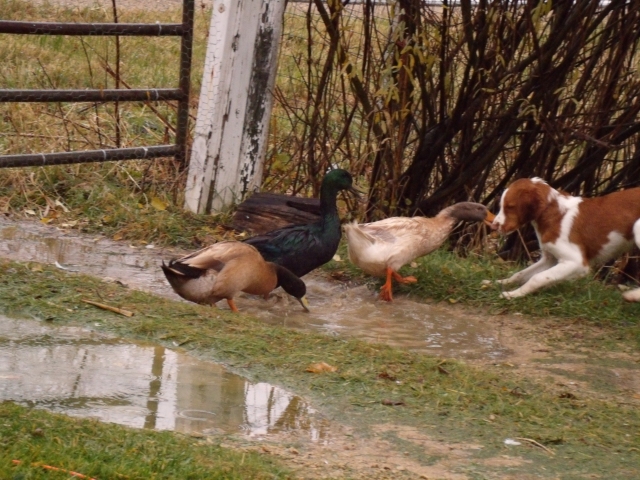 When Trip was a puppy they would chase each other around the yard and every now and then he’d manage to jump on one and wrestle with it puppy style before it would escape and waddle away, only to come running back to tweak his tail. 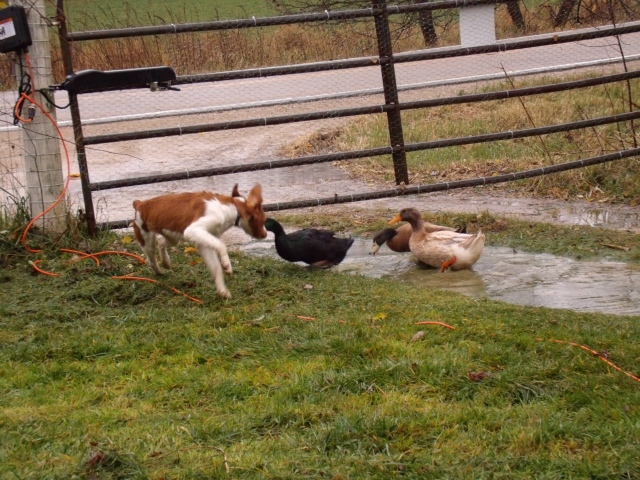 Now they still run and chase but I’m a bit more worried about duck damage. Trip jumps on a duck, lays down on top of it to hold it still and then “gently” chews on his victim, er, playmate.

Which is how I found myself in the yard yelling, “DON’T LAY ON THE DUCKS!”

Not exactly the concise sort of command a dog trainer recommends, but it works fine.

Must be something about the tone of my voice…

In today’s edition of “Did I Just Say What I Thought I Said?” we have a phrase which, in addition to being one of those things that:

A) shouldn’t have to be said in the first place,

B) shouldn’t have to be said by me and

C) that yelling out an open window of the house does not at all improve,

it also, sadly, is something we have addressed before. 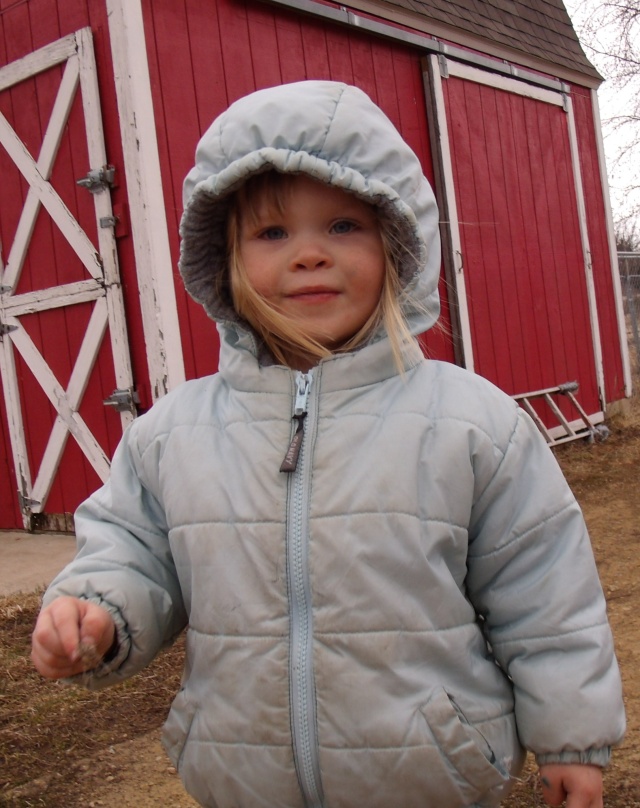 The worst part of this is, of course, the aftermath.

Moving the perpetrator (or should I say poopetrator?) to the toilet.

The lengthy explanation to answer the ever present “WHY?” question.

My explanation was going so well I was starting to worry that Clara was never going to poop outside again. Which, given that I would like to take them camping, might not be great thing for the long run. So we talked about acceptable times and places to poop outdoors.

Finally a poop free girl headed back outside with Ivy as they walked through the door I heard:

“Me poop outside in hole. Me go do that.”

Often I catch my self saying things that I never would have guessed,

A) needed to be said in the first place,

C) that I wouldn’t just be saying them, I’d be yelling them.

In my first edition of “Did I just say what I thought I said?” I give you:

“Don’t dry your hotdog off on a towel!” 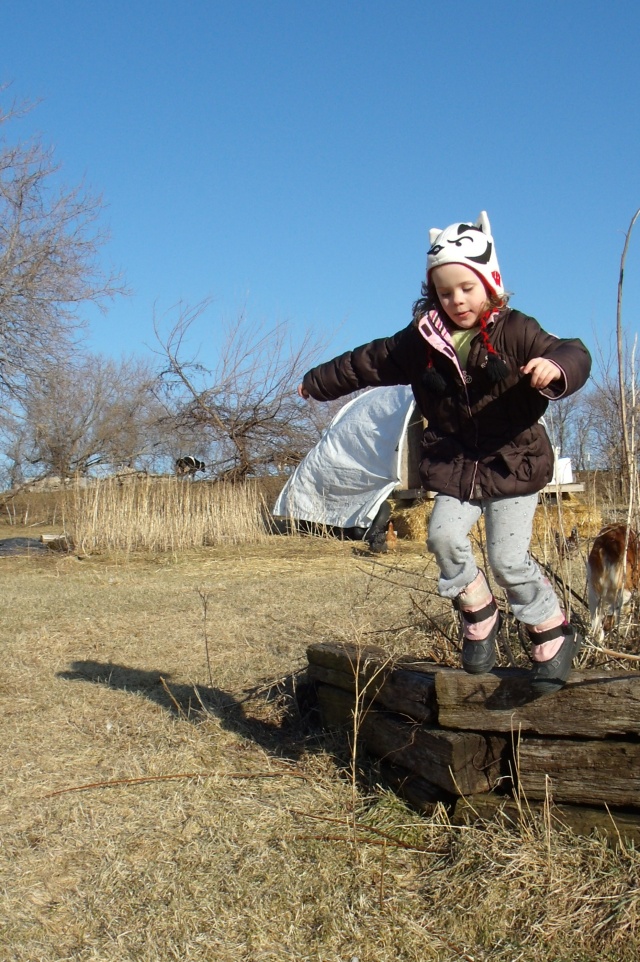 Note: As there is no hot dog or bath towel in this photo it has very little relevance to the above quote other than that the happily jumping girl is also the wanna be hot dog dryer.

Note: This picture has nothing to do with anything so far mentioned, I just like it.

Can’t beat that fall blue! #nofilterneeded #fallinwisconsin
Picking dried beans with Clara when I noticed the color of the pumpkins popping against the dark sky. Moments later we were running for shelter as we heard the wind hit the trees and the rain started dumping down. Our dried beans are not yet what one would classify as… dry… #driedbeans #storm
#fall
19 years. Still my favorite. #happyanniversarytous
They are off! 5th, 7th & 10th. And it turns out you can get a brief smile from clara on the first day of school… right after she bonks her sister in the head. #firstdayofschool #obligatoryphoto
Happy birthday Honey! 😘