Clara, Jane and I took advantage of the weather and headed to the zoo. 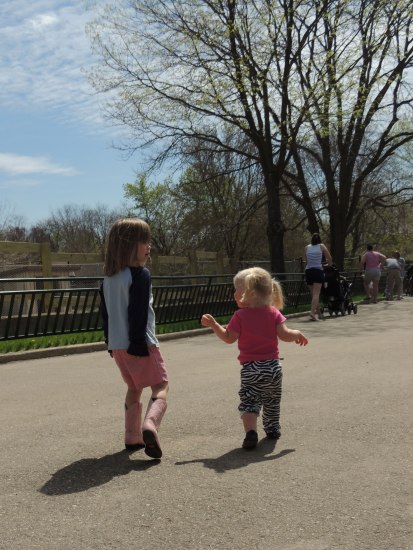 We weren’t the only ones happy to finally have warm weather, most all of the animals were also out soaking up the rays, including Ivy’s favorite lion Henry.

Jane was not only happy to be running outside but very excited to be at the zoo.

She looked for animals through all the fences she saw (even when they just contained flower gardens) and added a new word to her vocabulary: “See!”

Otherwise known as a very slow trip through the zoo.

Fortunately I had my camera and, despite the look on her face, Clara was just as happy to hang around and watch prairie dogs     for a while as Jane was.

Watching Jane’s excitement over everything today reminded me of one of the first trips Ivy took to the zoo when she was fully mobile and newly chatty.

Ivy was frantically running from animal to animal. Excited to the point of mania she had already seen the “LION!”, the “SEAL!” and we had just moved on from her current favorite the “GIRAFFE!” when she turned, stopped dead and shouted, “DINOSAUR!”

I gently corrected her that while it did certainly look like a dinosaur it was actually a rhinoceros.  Ivy promptly called it a “rhinosaur” and continued to do so for at least the next two years.

A pronunciation I never corrected, because really, just look at it…

Ivy was right they should be called rhinosaurs!