The worst part of being a card carrying, full fledged adult is going to the dentist.

It’s being responsible enough to drive yourself to a place that you loathe with every fiber of your being. A place that will likely cause you at least some amount of pain and suffering. And then, as if all that wasn’t bad enough, you’ll fork over lots of money and promise to come back.

Going to the dentist is the worst.

But whatever your worst thing is, if you had to do it today, try this.

Take a Diet Coke (or another fantastic beverage of choice) sit down and look at this lamb.

Be grateful that as an adult you also get to take spontaneous Diet Coke breaks midday and look at cute lamb pictures.

Then get up and go do a nasty project. Pick something that you’d normally hate, it’ll be so much better than the worst thing that magically, your nasty project will seem great.

Me, I’m taking my clean teeth off to mow the lawn.

Have you ever had a chance to watch a sheep shearer at work?

I find it to be mesmerizing.

The way wool comes off in one big piece, the sheep rolling in front and underneath the shearer as he turns them around and around.

The way he knows just where to grab a leg, push on a head or pull at an ear to move the animal easily into position.

The way he and the sheep make it look so easy that I want to try it too.

Instead, I looked at the length of his legs compared to mine, mentally calculated the weight of both sheep and clippers and decided I would join the watchers at the gate. 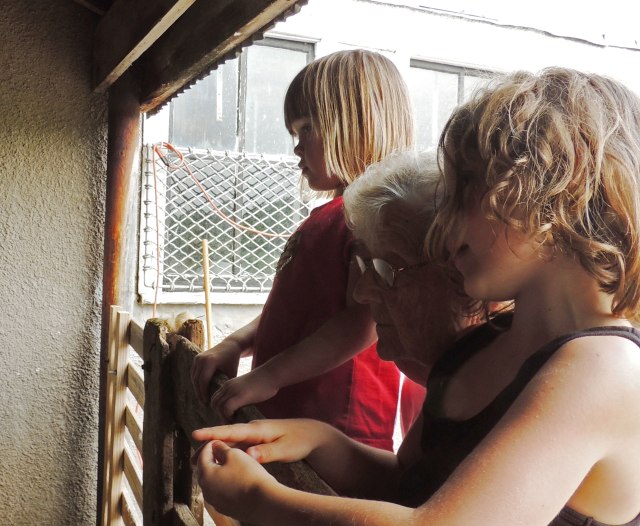 Some of us had an easier time finding a good spot to watch than others.

But she tried and tried. 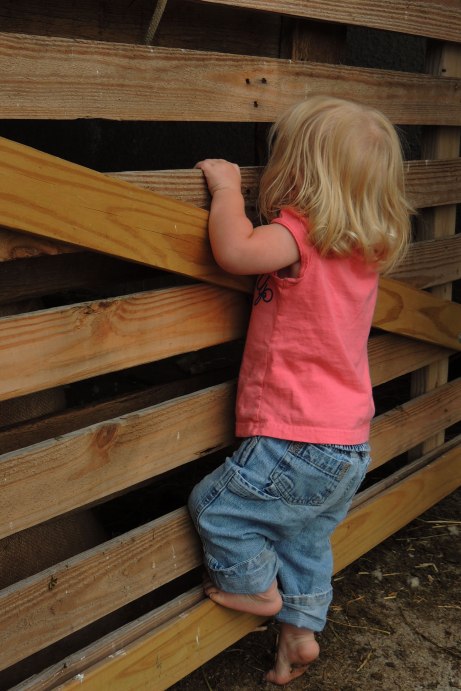 Just about when Jane got it figured out we moved locations.

Which is when I found myself sitting on a pile of hay in an old barn.

The rain on the roof was just loud enough to drown out the pockets of conversation between family and friends. The sheep moved about in the fresh straw while the kids helped feed them and as the shearer continued at his work, I sat and enjoyed the moment.

A  moment of calm in what has been an unusually stressful and hectic week as we continue on with our “relocation.”

A moment that smelled of hay, sheep, and warm rain.

A moment of the best kind.

Have you ever had a chance to watch a sheep shearer at work?

I highly recommend it.

The lambs are still shadows of their mothers, always together… 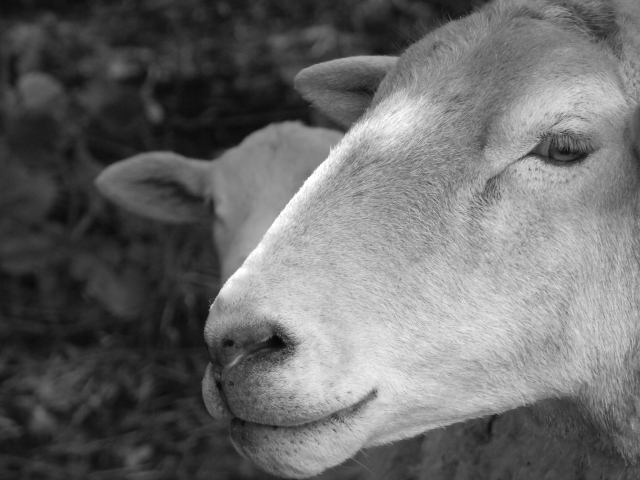 “I have fantastic news!”

That’s Ivy’s new announcement that precedes everything from information about what she’s been doing, what her imaginary friend is planning on doing or just letting me know that she said “excuse me” to a chicken and it moved out of her way.

In other fantastic news the sheep have arrived for the summer,

and we have two baby chicks.

They have been named Seed (the boy on the left) and princess  (the girl on the right) Ivy and Clara haven’t loved them enough to wear their feathers off yet but I think they are getting there!

You know those days when you lose your sheep… 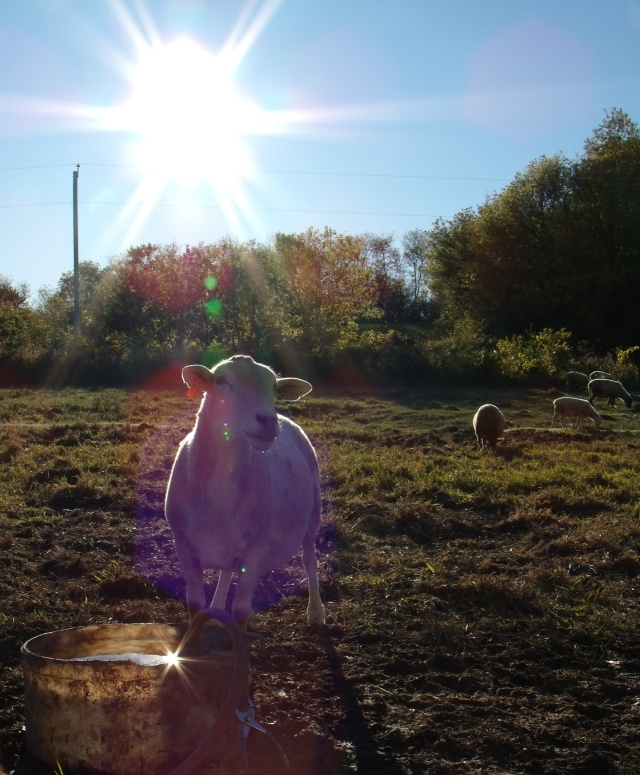 …but you don’t know it until your neighbor calls to say they are in his yard but he can’t help you because he’s going to the dentist and then you have to walk them home through the fields with a two year old on your shoulders a bucket of corn in your hand while cajoling your four year old the whole way and then when you’re almost home the two year old grabs the electric fence while you are holding her other hand, which is an effective way to test the fencer but a really bad idea and then when you get all the way home you find out that your most wonderful dog has eaten a gigantic pile of dog food out of the bin while you were gone because some innocent looking girl…

… left the pantry door open and the lid off the dog’s food and after puking the dog and monitoring her water all day and listing to the request of “Dammit Mom I need some ketchup please.”  and loading sheep to take to the butcher in the dark, your husband asks if you want some help putting the girls to bed and the combination of the day and the rampant hormones and the lack of sleep from the night before sends you off into something that’s like hysterical laughter but maybe is just hysterics, you know those days?

Yeah, that’s the kind of day I had.

I’d like to leave you for the night with words of wisdom from Great Big Sea, “…it’s a double edged knife but there’s always tomorrow…”

Once again we were hit with a nasty flu bug here.

Except this time it was really nasty and it got me the worst.

I know this for sure because by Friday I was feeling well enough to brave a few hours of the day on my own.

Instead she gave a lamb a bath in the yard.

There are so many things wrong with that I can’t even talk about it.

I’m just thankful we seem to be back to normal.

I’m pretty sure the sheep are grateful as well. 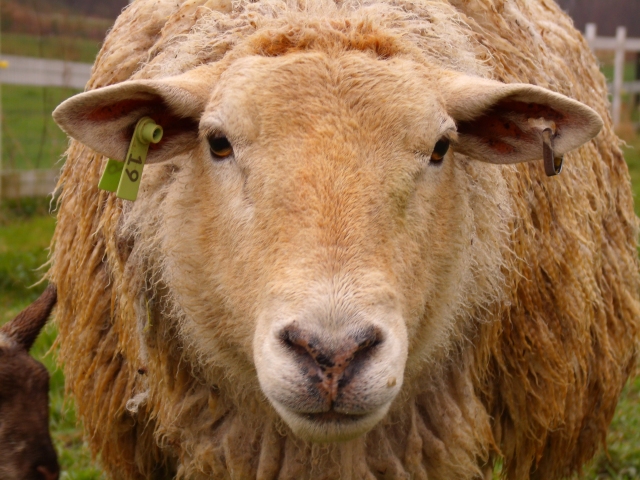 Thanks to my Mom and her friend some of George and Sue’s flock have arrived for the summer, and boy are they cute!

Another Halloween has come and gone and I can’t say that I’ve converted into a fan.

There have been Halloween’s in the past that were worse.

-There was the year my roommate got into a bar fight and got punched in the face. She only weighed about 100 lbs.

-There was the year I got food poisoning. Thankfully that coincided with the year the swim team was stalking the streets of Stevens Point looking for the wrestling(?) team over some infraction I have since forgotten but it involved a lot of crying girls.  I missed it all and only heard about it the next day, no big loss.

-There was the year I tried to avoid all Halloween related activities. Piper as a very large puppy gave me a black eye that night.

Last night while there were no catastrophe’s I’m not sure the amount of fun had was worth… well, all the rest of it.

The problem stemmed from the fact that I have a three year old.  (If you are unfamiliar with daily life with a three year old or need a refresher Motherhood Uncensored described it fairly well today in Congrats on your 3-year old!) The three year old had a problem with her costume.  It started about an hour before we were reading to go trick or treating and it went like this…

Meanwhile I was dressing Clara.  She doesn’t talk.  Some days I love that about her.

Finally I assembled an uncooperative lamb and a fairy in the yard:

As I took pictures of the girls in the yard (quickly before someone decided to take her wings back off) I discovered something. Both real sheep and pretend sheep take about two minutes once they hit our property to get burrs in their wool.

(No Clara is not picking her nose in all these pictures she’s picking the scab from getting a gigantic sliver in her face after falling in the garden, but that’s a different story)

As I deburred Clara we waited for John. We were waiting because, as everyone knows, the best time to butcher sheep is just before you go trick or treating with your kids…at the last minute he came running to the house changed his clothes looked at me and said, “Now, do I have any blood on my face?” I tried to convince by color blind husband that this was the one night it really didn’t matter… He didn’t care, something about real blood vs. fake blood… in any case we loaded up and headed into town. 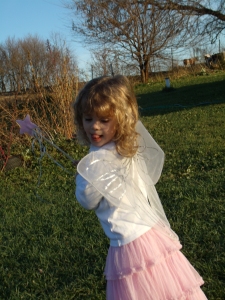 When we got there the girls had an hours worth of fun filling their buckets full of candy.

That night while John was back outside skinning sheep in the dark (talk about creepy Halloween activities) and I was putting Ivy to bed  I tried to decided if it was worth it.

You know, I’m still not sure, but I can tell you with out a doubt that I love mini Milky Ways!

Ivy has already put Clara in training, which is only right, she is the big sister after all.

Some of the things Ivy has been training Clara to do I could do without: high pitched squeaking at the dinner table, yelling nonsense words in the backseat of the truck, and Clara really didn’t need her sister telling her that dog food is delicious.

With other things it seems like Ivy might be trying to help. The best example of this is trying to teach Clara sign language. We taught Ivy signs when she was a baby, loved the results and so are trying to do so again with Clara. The trouble is that Ivy is “helping.”  Sometimes she helps by giving Clara what ever it is she wants, without being like mean ol’mom who waits for a sign. But perhaps most frustrating is her tendency to make up random hand motions for Clara and pretend they are signs.  I’m hoping Clara will be able to pull something useful out of the whole experience but my hopes are dimming as time goes on.

Of course there are other things that Ivy is training Clara in that are truly helpful. Ivy teaches her how to play somewhere else while I’m cooking dinner, they are working on how to walk, and like every good Tom Sawyer Ivy is teaching her about her new job.

Ivy loves it when Clara comes out to check on the sheep with her, and because she is with her big sister Clara loves it too!

Sometimes looking up to your big sister is a literal sort of thing. 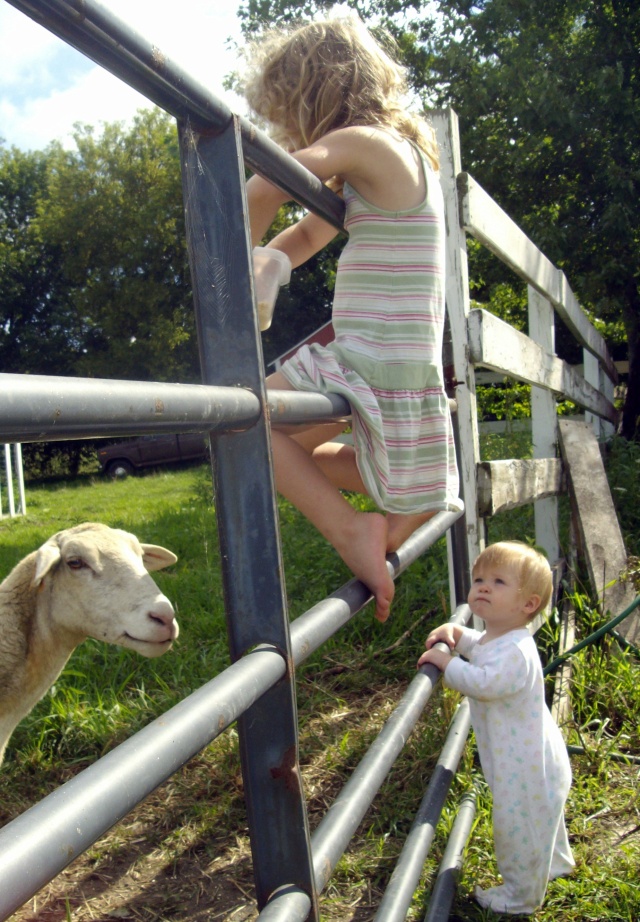 Ivy’s only disappointment with Clara’s training so far is that she hasn’t yet managed to teach her how to climb the fence, fortunately Clara is just happy to be out counting sheep with her sister!

… she was looking for sheep!

Spring storm.
Spring sprung so hard it feels like summer! #crabappleblossoms
Dead bugs
“I has all the ducks!” Baby duck time is a necessary chore when we aim for friendly adult ducks. #itsatoughjobbutsomeonesgottadoit #ducklings #anconaducks
End of a good day. #nofilter #appleblossom
Here are two cute ducklings as a thank you for all the birthday and health well wishes!💛