There once was a pet dove named Louie,

Who was bit by a cat called Kafluwie.

The cat spit him out,

There was never a doubt,

That Kafluwie found Louie too chewy.

The cat’s name was probably Simone but since she wasn’t caught in the act we can blame it on the mythical Kafluwie Kat.

The bad news is she bit him in the head. The good news is that he is on his way to a full recovery. Still on antibiotics and not quite back to his normal self, he has been cooing a bit again and is currently soaking up the sun as he spends the day convalescing in the greenhouse.  In the meantime I’ve put up signs declaring our bedroom a cat-free zone and then rearranged half the house to move his cage into it. Now I’m in the process of running around with a tape measure and inspecting all our bird cage options trying to come up with a better long term plan.

More good news- he didn’t lose an eye like I thought he might! (That weird poky thing is just a scab that’s coming off above his other eye).

Free to a mediocre home, one cat named Kafluwie.

(Simone, for better or worse, is Jane’s cat and will be continuing to live with us.)

I had a glass of water until a cat took it.

Unlike a dog there were no liquid eyes begging for a drink.

The cat just claimed my water glass and dared me to oppose her.

Brazenly, sitting on the table, repeatedly dunking her paw and licking it off.

As if there weren’t multiple bowls of water for the cats and dogs scattered around the house. 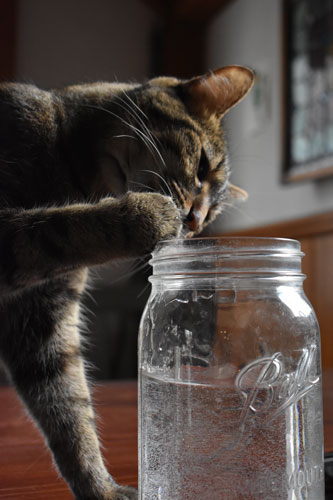 I had a glass of water.

And then a cat took it.

I have this picture that I keep meaning to share but I’ve been holding off waiting for just the right caption to come to me.

How would you caption this picture of the poor sad puppy who appears to be locked out of the house by the grumpy cat?

Photo blogging my way through the alphabet with:

A single photo – no words – capturing a moment from last month.

A simple, special, extraordinary moment, where camera operator, lighting and cat all cooperated.

Moving to the new house has been an adjustment for everyone, animals included.

While the chickens walked out of their coop into the middle of the apple trees, took in the fallen apples and bugs and were convinced they had gone to chicken heaven, the other animals have been a bit more reserved in their feelings.

Louie (the under-appreciated dove) was the next to recover. Happy to be out in the living room and no longer stuck behind piles of boxes (you can see his cage in the background here) he’s happily cooing and taking in the activity around him.

Fiona had been spending her days hiding in the bed but some kitty drugs have worked wonders and now she’s out, about and nearly back to normal.

Trip spent the first day wondering why we got so mad when he ran under the gate in the backyard to explore his new home turf and then frustrated by the fact that he now has a normal large sized yard to run in instead of a five acre field.

Then he discovered chipmunks.

Now he’s practicing his digging and climbing skills. Since I routinely warn people about his holes and have recently found him on top of a round bale I figure it’s only a matter of time before he excavates the entire yard, climbs the willow tree or both.

Storm was a little longer settling in. Chipmunks weren’t doing it for her. She was busy doing her best attempt at becoming John’s shadow when she discovered the apple trees.

More specifically she discovered the apples.

Now, think of an apple, how it feels when you hold it in the palm of your hand. Smooth, roundish, firm. Some apples are shaped to fit the hand so perfectly that if you were to sample it and find it not to your liking you might just throw it off into the bushes and find a new one.  Yes, what I’m saying is that apples are like balls and sometimes, without thinking about it, we throw them.

If the horror of this situation has not yet occurred to you go read my post on Storm’s Sticks. Substitute the word “ball” every time you see “stick,” realize that Jane is now old enough to throw apples and you will understand why Storm is a very happy dog… 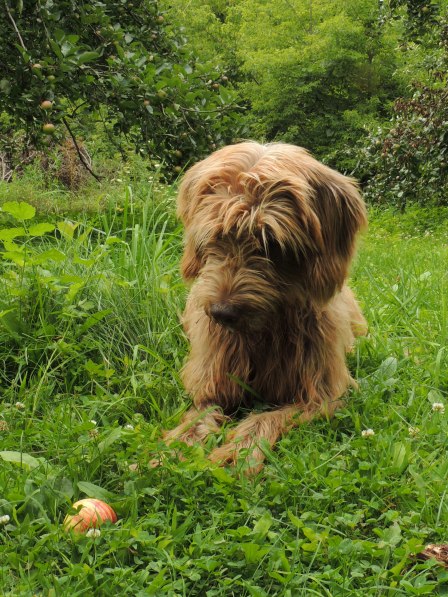 …and I am wondering what on earth we were thinking moving to a place with a small orchard!

Anyone who ever looked at a cat and thought: “Now that’s the life!”…

…forgot to factor in children. 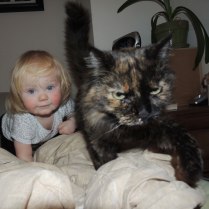 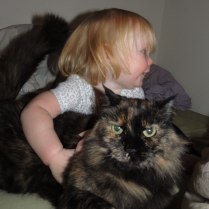 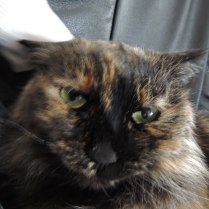 Ready for transport from summer rain barrel home to winter fish tank home! #goldfish #rainbarrelfish
Sunday morning storm watch. “It’s like a movie!” #stormwatching #midwestfun
Happy birthday Clara!
Accidentally decorated for fall when I hung up some corn to dry and have decided accidental decorating is probably my only decorating style.
This seems to be one of those days where it may look like I have all my ducks in a row… but I know that I have just as many ducks lost and quacking, laying eggs where they shouldn’t and wandering off by themselves in search of treats. #BadAnalogyThursday #TiredThursday #AnconaDucks #WhoActuallyGetsTheirDucksInARowAnyway #ConcussionRecovery
This is what concussion looks like. You can’t see it but I can feel it.